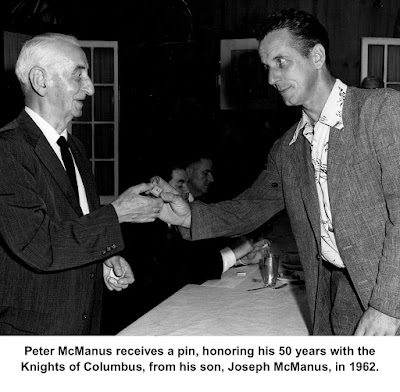 Peter McManus:
Judge and Legislator
In 1945, during the second of his six terms as representative from Ridgefield in the General Assembly, Peter McManus helped draft the State Labor Relations Act. The Republican’s post that year as chairman of the House labor committee was rated the “toughest assignment” of the session by a Hartford newspaper columnist.
The act established a three-member Board of Labor Relations, aimed at protecting the rights of citizens to join unions and bargain collectively.
When Governor Raymond E. Baldwin was ready to sign the bill, he called  McManus and other sponsors to the ceremony. It was April 12, 1945. Just then the phone rang with news of Franklin Roosevelt's death, and the signing was postponed.  McManus often observed in later years that he had an edge of Democrats who didn’t remember the exact date on which President Roosevelt died.
Once the bill became law, the governor named McManus to the board, a post the Republican held through Democratic and Republican administrations until his retirement in 1967.
A native of Scotland, Peter A. McManus was born in 1889 and was trained as a builder and architect. He came to Ridgefield as a young man, at first working for “Big Jim” Kennedy, the town’s major builder.  One of his first significant jobs was construction of the sunken gardens at Casagmo in 1911-12. (After Miss Mary Olcott died in 1962, McManus proposed that the town purchase the Casagmo estate and use the mansion as a town hall, a proposal that did not gain much support.)
McManus eventually started his own construction company, and many men who were to become top carpenters in town got their training under him, including Dan Tobin, Terry Knoche, Gus Venus, and John P. Leary.
When the town had a Trial Justice Court, he was a judge for many years. The court handled  smaller offenses such as  breaches of the peace, domestic disputes, bootlegging, and traffic violations. It was the last that took up most of the court’s time, and one of the most frequent offenses back in the 1920s was driving without a license. One day, McManus heard 16 cases of people caught without a license — he gave the opinion afterwards that half of Ridgefielders on the road had no license. “Some of these people reasoned that because a license was not needed to drive old Dobbin,” said historian Dick Venus, “they should not have to get one to drive the family car.”
McManus served six terms  in the Connecticut legislature from 1941 until 1953, and was also on the Board of Assessors. He was active for more than half a century in the Knights of Columbus.
Two of his three sons also became active in the community — James, as the town’s building inspector in the 1970s and 80s, and Joseph, as a sheriff and volunteer fireman.