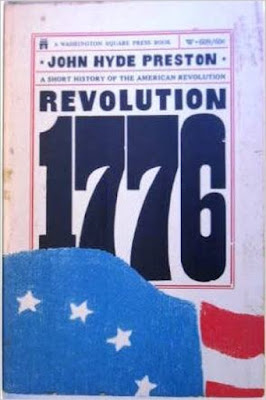 John Hyde Preston:
Debunking Liberal
John Hyde Preston made himself a bit unpopular with some of the populace back in 1933 when his book, “Revolution, 1776,” attempted to debunk many popularly held beliefs about the American Revolution.
The book declared among other things that the Declaration of Independence was made on July 2, not July 4, that John Hancock did not sign it until 47 days later, that the Liberty Bell never pealed the glad tidings, and that Betsy Ross did not sew the country’s first flag (Frances Hopkinson did, the author said.)
Preston also maintained that more Americans probably served with the British than with the Continental Army.
John Hyde Preston was born in 1906 in New York City. He wrote articles for Harper’s, The Atlantic Monthly, McCalls, Holiday, and other magazines and lived in many places both hereabouts (Ridgefield, Wilton and New Canaan) and in the world (Italy, Denmark, and Iceland). He spent his last 10 years in Canada where he died in 1980 at the age of 74.
Preston wrote both novels, such as “Portrait of A Woman” and “The Liberals,” and non-fiction, such as “Mad Anthony Wayne, Gentleman Rebel” and “Revolution, 1776.”
Herschel Brickell, the editor and critic who lived and died in Ridgefield, wrote of “Revolution 1776,” “Mr. Preston is no conventional historian. He knows his subject as well as anyone, but he breaks with tradition in writing entertainingly. This is a fine book. “
However, Howard Fast, the historical novelist who lived in Ridgefield years later, decried Preston’s work in a long essay, published in 1950 in a scholarly journal.  For instance, citing Preston’s questionable description of a revolt of troops corralled by Mad Anthony Wayne, Fast asks, “Where did Mr. Preston get his information and what prompted this gratuitous slander of brave men – so much in the style of today – who had fought tirelessly and well for five years?”
Preston  lived in Ridgefield in the 1930s and was better known locally for “The Liberals,” his first novel, in which the Gilbert and Bennett wire manufacturing company in Georgetown was cast in an unfavorable light. The “left-wing novel”  (written in 1938 on yellow paper that  Preston bought at the Ridgefield Press office) features the head of the wire mill who is good to his employees but who hates 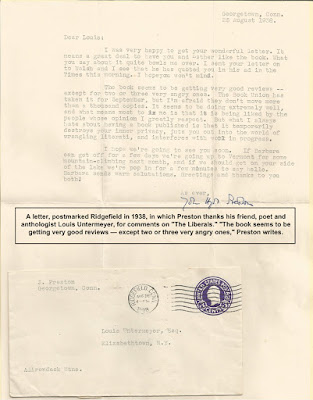 unions, and a young playwright who is love with the daughter of one of the mill workers battling the boss. A New York Times critic said the book “digs into the foundations of the modern economic structure and exposes much of the rot which undermines it.”

While it has a liberal slant, the novel also points out problems of liberals and their intellectual floundering. “We weigh everything until it evaporates,” says the playwright’s girlfriend. “We’re like John Dewey, taking the 10-year-old intelligence tests and failing them. Dewey knew so many answers to every question that he tried to give them all and when he was through, he flunked a test that any normal 10-year-old could pass. And that’s what we do. We doubt and juggle and re-examine until we can no longer give the simple answers.”
Preston, incidentally, described the mill as being in a small village near the town of Hatbury, Conn. The Times reviewer said he should have said Danbury (once the hat-making capital of the U.S.).  “The fictitious substitute seems needless and often is unreasonably irritating.”