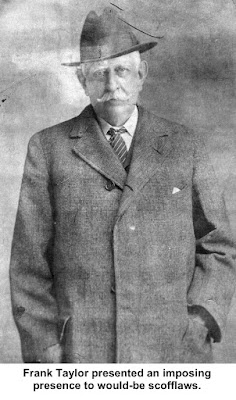 Frank Taylor:
The First Shot
According to his obituary in the Feb. 5, 1931 Press, Frank Taylor was “Ridgefield’s first regular officer” of the law. He may have also been the first one ever to shoot a suspect.
A native son, Taylor was born in 1860 in the Limestone District and in the late 1890s became “the village night watchman,” a job he held for some 25 years.
Back then, there was no police department and merchants chipped in for his $100-a-month salary. He would  check their front and back doors each night, and see that other things, such as streetlights, were in order.
“He was a big man and exhibited a very authoritative appearance,” said Dick Venus in a Dick’s Dispatch column in the 1980s. “He was, however, a very kindly and understanding gentleman.”
And, Venus added, Constable Taylor and his large nightstick were well respected by kids and appreciated by parents. When he approached groups of youngsters at 8 or 9 at night and suggested it was time to head home, “it would have been a very rare occasion if a dissenting opinion was expressed,” Venus wrote.
But he could also proved capable of handling bigger things and was involved in foiling a burglary of the U.S. Post Office.
One Sunday night in 1903, a trio of men in a wagon drawn by two horses pulled up in front of the post office, then located a few doors north of where Books on the Common is now. Just down the street, in front of the town hall, was Dick Venus’s father, Charles, and four friends, chewing the fat in front of the town hall. They saw the wagon pull up. Here’s how Dick Venus describes what happened, based largely on his father’s eyewitness account:
“One man stayed in the wagon, to hold the horses, and the other two approached the post office door. One carried a large crowbar and it was evident that they were not about to mail that heavy bar.
“The five at the town hall had directed their attention to the activities down the street and when the sound of the front door of the post office being forced reached their ears, they all began to shout for Frank Taylor.
“That exemplary limb of the law had just started his evening tour and had crossed Main Street from the apartment over Bissell’s Drug Store, that he shared with his daughter Mabel and her husband, Mally Knapp.
“Frank was in the driveway between St. Stephen’s Church Parish House and S.D. Keeler’s store (now Deborah Ann’s Sweet Shoppe). Frank hurried to the front of the store, as best he could. He was somewhat impeded by an affliction that caused him to throw his right foot out forward, in a rather awkward manner. This encumbered his stride and earned for Frank the nickname, ‘Steppy.’ It was, however, never used in disrespect.
“Steppy had never really needed to hurry because his very commanding presence generally brought everything else under control, and word of his expert marksmanship was well known to those he must keep in line.
“Frank’s alert mind took in the scene being enacted on the other end of the street, and with his powerful voice, he yelled at the men to halt. Unfortunately for them, these men had not heard of Steppy’s prowess with the weapon that he carried.

“This huge gun was known as a ‘hawg leg’ and was actually a greatly oversized revolver of .45 calibre. It was not as large as the sawed-off rifle carried by Steve McQueen in the movies, but it would remind you of it.
“At any rate, the two men had entered the post office and were not returning and carrying the little safe that probably weighed about 250 pounds. Another command from Frank went unheeded and he drew his long revolver.
“His first shot sounded just as the men had hoisted the safe and were about to lower it carefully into the back of the buckboard. The bullet struck one of the thieves in the leg and caused him to relinquish his hold on the safe, and it went crashing through the floorboards of the wagon, landing in the graveled roadway.
“The wounded thief was hauled up into the wagon. All thoughts of thievery had dissipated as the buckboard and its occupants took off up north Main Street.
“So the thieves got away, but without their loot. The attempted robbery was never solved, but the grand old man had scored again and sleepy little Ridgefield was spared the embarrassment of having its post office safe stolen.”
In the mid-1920s, Frank Taylor was transferred from night duty to become the first daytime patrolman of the village, a job largely devoted to traffic and parking problems.
For many years he was also active in the fire department, served as a registrar of voters, was chairman of the Democratic Town Committee, and led the local Odd Fellows lodge.


“Mr. Taylor was kindly and cheery in disposition, always ready to do a good deed or to assist in any good cause,” his obituary said. “Yet he had the courage of his convictions. He never arrived at hasty conclusions in important matters, but carefully weighed the merits or demerits before reaching decisions.”