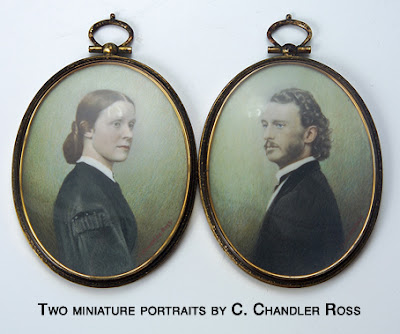 C. Chandler Ross:
Portrait Artist
C. Chandler Ross was a portrait artist who painted many of the captains of industry during the first half of the 20th Century, including F. W. Woolworth of the store chain, but he had also produced portraits of Franklin D. Roosevelt and Harry S Truman.
Born in 1887 in England, he studied art in Paris and Munich, and under Anders Zorn, a Swedish master of painting.
“The American business executive is not the hard, crusty individual he is supposed to be,” Ross once said. “Invariably I find that he is most delightful when he drops the guard that modern business forces him to maintain during office hours.”
His work included even miniature portraits, done in the style of the 18th and 19th Centuries.
When not painting portraits,  Chandler turned to flowers, and his floral paintings were well known and often reproduced. Many were published by the New York Graphic Society.
In Ridgefield, Ross was better known as the man who purchased the former Ridgefield Golf Club and built the Peaceable Street estate that later became Ward Acres, home of Jack Boyd Ward and Olaf Olsen.


Ross died in 1952 in Sarasota, Fla. at the age of 64. (He was no relation to another well-known Ridgefield artist, Alexander Ross.)