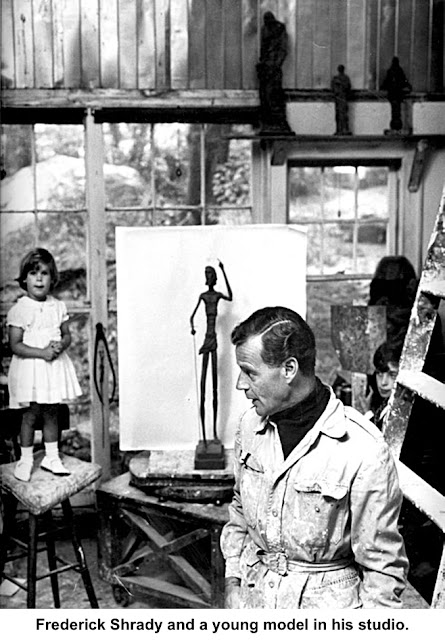 Frederick Shrady:
Artist Who Rescued Art
A well-taught painter turned self-taught sculptor, Frederick Shrady became  internationally famous for his art, especially on religious subjects. But as he was gaining fame as an artist, he was also helping retrieve thousands of priceless art treasures, stolen by the Nazis.
Born in East View, N.Y., in 1907,  Frederick Charles Shrady was a son of American sculptor Henry Merwin Shrady, who created the Grant Memorial on the Mall near the Capitol in Washington. He got his first taste of Connecticut when he attended the Choate School in Wallingford, graduating in 1928. He studied painting at the Art Students’ League in New York City, and then went to Oxford University in England where he graduated in 1931.
That year, he moved to Paris  to paint and to study painting. Over nine years there, he gained 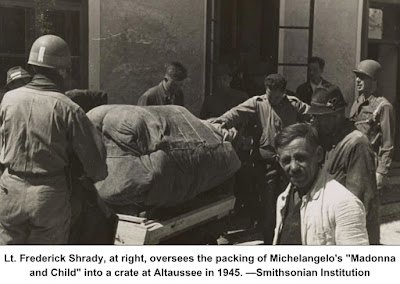 esteem as an artist and earned a medal at the 1937 Paris Exposition. His paintings are in museums in Paris, Lyons, Grenoble, Belgrade, and Zagreb. Before was 33, he had had solo exhibitions in Dublin, Paris, Belgrade, London, and New York.

Early in World War II, Shrady worked with the French underground — he was later awarded the Legion of Honor by the French government.
In July 1943 as war raged on, he enlisted in the U.S. Army, serving at first in the Model Making Division that created elaborate decoys. But he soon became involved in even more fascinating work:  As the war was ending, Lieutenant Shrady joined the Army’s Monuments, Fine Arts, and Archives (MFAA) division (celebrated in the 2014 film, “The Monuments Men,” starring George Clooney and Cate Blanchett).
According to the Monuments Men Foundation,  in June 1945 he was one of the team  that removed thousands of stolen art works, stored by the Nazis in a mine at Altaussee, Austria. Hitler had 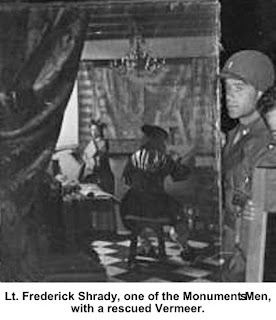 collect them there for his planned “Fuhrermuseum” in Linz, Austria, a huge complex to showcase his plunder.  The Monuments Men were racing to rescue the art before the arrival of Russian troops who eventually took control of Austria.

“Together, they carefully packed Michelangelo’s ‘Bruges Madonna,’ Vermeer’s ‘The Artist’s Studio,’ and the Ghent Altarpiece by Jan van Eyck,” the foundation said. “Shrady and the Monuments Men evacuated these great works of art, along with over 15,000 other works of art and cultural objects, to the Munich Central Collecting Point. In the following months, Shrady conducted inspections of churches, castles, and museums in Wiesbaden, Germany.”
It was while serving in Austria that he met his future wife, Maria Louise Likar-Waltersdorff, who had grown up in Vienna and was working as an interpreter for the Monuments Men. They married in 1946.
Back in the United States after the war, Shrady continued to paint and was turning more to religious subjects. In 1945, though he was an American Episcopalian, he had created a 14-foot high painting, “Descent from the Cross,” for St. Stephen’s Cathedral (‘Stephansdom’) in Vienna, as a gift from the U.S. Armed Forces to the church. He became the only American to have his art in this and several other major churches in Europe including a mural of St. Francis in the chapel of St. Francis in Paris and a painting of St. Christopher in the Dublin Cathedral.
“I have a feeling for spiritual work,” Shrady once said in an interview.
After he moved to Ridgefield in 1948 and converted to Catholicism, Shrady turned to the 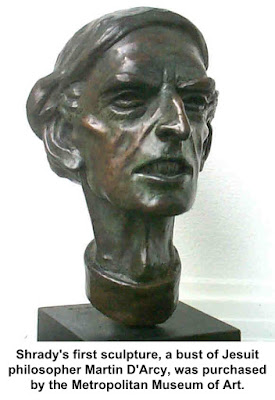 medium of his father, taking up sculpture as virtually his only medium. His very first work, a bust of noted Jesuit philosopher Martin D’Arcy created in 1949, was so good, the Metropolitan Museum of Art purchased it. (Father D’Arcy later wrote the introduction to Maria Shrady’s first book, “Come, Southwind,” written in Ridgefield and published in 1957.)

Having the Met buy a “beginner’s” work would be a tremendous boost for any artist, and Shady quickly immersed himself in sculpture.
Around 1954, he created the altar statuary, 28 stained-glass windows, 14 painted stations of the cross, and many small windows symbolizing various saints for the new St. Lawrence O’Toole Church in Hartford. The altar art included a nine-foot figure of Jesus on a 16-foot high cross. Shrady said the only way he could see for himself how the figure would look was to have himself tied to a beam and then photographed, which he did.
Frederick and Maria lived on  the northern corner of Route 7 and New Road and belonged to St. Mary’s Parish. In 1956, as St. Mary’s was building its new Catholic school, Shrady set about creating 53 sculptures for the new building. His two youngest children were among the early St. Mary students.
In 1959 he and Maria and their children moved to Easton where Shrady had purchased a large stone mansion, built in the late 1930s by the American author Edna Ferber (his daughter Mary Louise Shrady Smith lives there today). 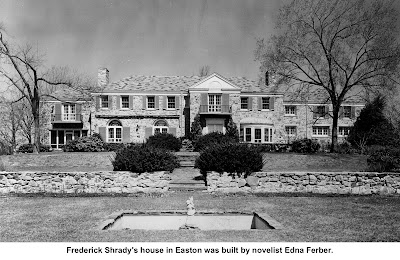 Shrady had become a friend of many leaders in the Catholic church and among the guests at his Easton home in 1976 was Cardinal Agostino Casaroli, secretary of state of the Vatican. The cardinal admired Shrady’s work and suggested he create a statue for the Vatican Gardens, a 16th Century papal retreat behind St. Peter’s Basilica that is usually closed to the public. Shrady liked the idea and five years later, when Cardinal Casaroli was again staying at his home, Shrady showed him a model for a statue of “Our Lady of Fatima” that he thought would be appropriate for the gardens. The model was shown to Pope John Paul II who approved the work, the first time an American artist had received a papal commission.
The 10-foot bronze statue was unveiled before the Pope in 1983 on the 66th anniversary of the apparition of Mary to three children at Fatima, Portugal. That date, May 13, was also the anniversary of two attempts to assassinate the Pope, in 1981 in Rome and 1982 at Fatima. “He is convinced that our lady of Fatima interceded for him,” Shrady told a reporter in 1984. 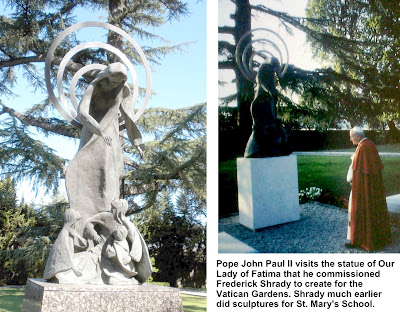 Among the handful of guests for the Pope’s blessing of the statue were Louise and Dan McKeon of Ridgefield, friends the Shradys and supporters of  Frederick’s work. “There we were, a small group, standing in the Vatican gardens with the Holy Father, and something we had all cared about and been involved in was finally being realized,” Louise McKeon said later. “It has been beautifully placed, under a well-pruned cedar of Lebanon.”
When the ceremony was over, “the Pope went up to the sculpture again and spoke with Mr. Shrady, bringing tears to the artist’s eyes,” McKeon recalled.
Among Shrady’s major works are: 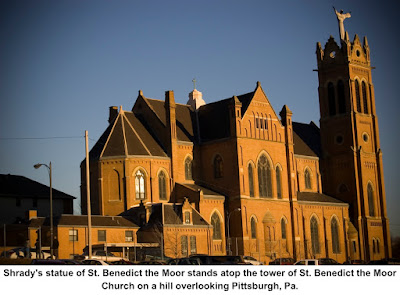 One of his more unusual works was a huge bronze sculpture on the facade of St. Ann Chapel, an Anglican church near Stanford University in Palo Alto, Calif. The chapel was built by Ridgefielder Clare Boothe Luce in memory of her 19-year-old daughter, Ann Clare Brokaw, a student at Stanford killed in a 1944 automobile accident. Shrady’s sculpture on the building’s facade portrays Saint Ann and the Virgin Mary, with the mother (St. Ann) teaching her young daughter (the Virgin Mary) how to read.
Frederick Shrady died in 1990 at the age of 82. Maria, who died in 2002, was the author several books. In 1961 she won the Christopher Book Award for “In the Spirit of Wonder”; other works included “Moments of Insight” and “The Mother Teresa Story,” and translations of various religious writings.