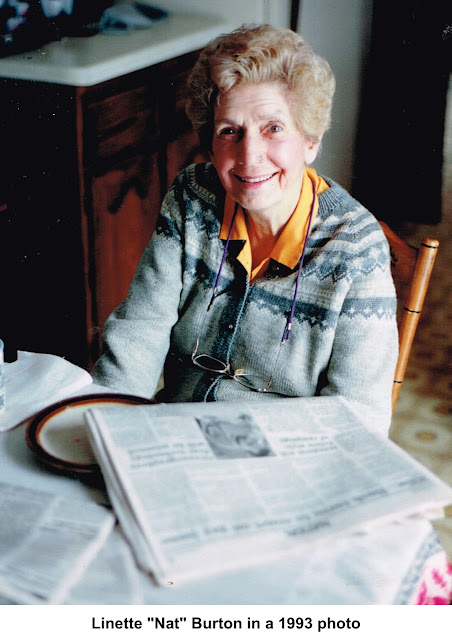 Linette Burton:
The L.O.L.
To anyone who sends a text message on a telephone, LOL is a staple acronym. But to thousands of readers of The Ridgefield Press from the 1950s to the 1990s, LOL meant something entirely different. Headlines would announce, “The L.O.L. Goes Round the World” or “Mr. Carter and the L.O.L. Talk Tobacco,” and readers would know the “Little Old Lady” had been off on another adventure.
Linette “Nat” Burton herself came up with the moniker, which started out as “the little old lady in tennis shoes,” got shortened to the “little old lady,”  and then became just “l.o.l.”
“Like lemmings going to the sea, the newsmen and the l.o.l. scurried across a snowy area and into the Cabinet Room in the White House,” she wrote in 1978 after she took part in a briefing with President Jimmy Carter, one of her many little old lady stories.  “As the l.o.l stamped her sneakers to get the snow off, she felt more than a little awed.”
Burton sat at the cabinet table in a chair that normally belonged to Joseph Califano, then the secretary of Health, Education and Welfare, who had recently railed against smoking.
“Taking a deep breath, the l.o.l. quaveringly announced her name and the paper she represented,” she wrote. She then indirectly offered a question for the president: “I happen by pure chance to be sitting in the seat that really belongs to Mr. Califano, which made me think that isn’t it odd that, while the United States government continues its price support of the tobacco industry, Mr. Califano has come out so strongly against smoking.”
The president smiled and said, “I don’t think it’s odd. As you know, Connecticut produces a lot of tobacco, and so does Georgia.”
There was laughter and, Burton wrote, “the moment to be forever remembered by the l.o.l. was over — the moment when the President of the United States spoke directly to her.”
Little did she know that a few years later, she would sit right next to President Ronald Reagan at a similar gathering.
Linette Arny Macan Burton was born in 1916 in Easton, Pa., daughter of the headmistress of a private girls school and a machine tool salesman. In 1933, her mother became head of St. Agnes Episcopal School in Alexandria, Va., where Linette Macan spent her senior year and, among other things, wrote the school song. Fifty-six years later, Burton returned to the school to find “Hail St. Agnes” still being sung by its students. (Even though in 1991 St. Agnes merged with a boys prep,   “Hail St. Agnes” is still sung today at St. Stephen’s & St. Agnes School. So is the “St. Stephen’s Fight Song.”)
She majored in English at Wheaton College in Norton, Mass., and served as editor of The Wheaton News. After graduating in 1938, she became an intern for The New York Herald Tribune and always remembered her getting her first byline for a story for the “Home Institute” section of the paper on “double ball-bearing casters.”
She soon became a staff writer for  Click, an entertainment magazine published in Philadelphia. While there she met a copy boy named Earl Burton, who was working for the Washington bureau of Time magazine. The two were married in 1940, and for a while Linette commuted to work each day from Washington to Philadelphia.
When World War II broke out, she joined the Office of Civilian Defense in Washington as a writer and public relations person while Earl became a lieutenant in the Navy,  serving as a writer in London during the German blitz and later in the Pacific. 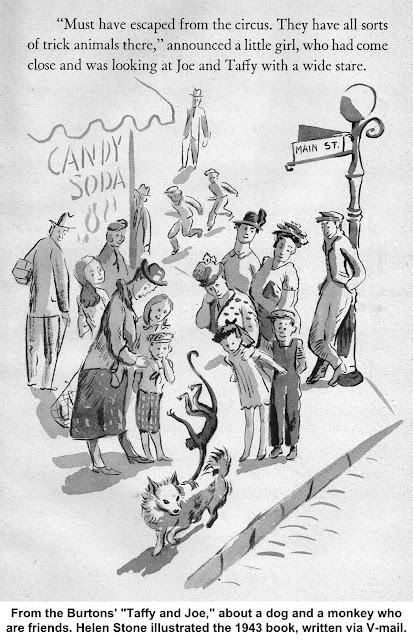 While they were apart, the Burtons wrote two children’s books using wartime “Victory mail,”  a military mail process in which each letter would be censored, copied to film, and printed back to paper on arrival at its destination.  Their V-mail collaboration resulted in “Taffy and Joe” (1943), about the friendship between a dog and a monkey,  and “The Exciting Adventures of Waldo” (1945), about a wooden decoy duck that comes to life in the wild.  Both were published by McGraw-Hill and illustrated by Helen Stone, a popular children’s book illustrator in the 1940s.
After the war and stints with Time’s Ottawa and Toronto offices, the Burtons moved to to Ridgefield in 1954 after Earl joined Time/Life’s New York headquarters where he eventually became the director of correspondents for Sports Illustrated. He died in 1968, only 52 years old.
The Burtons and their children lived on Bennett’s Farm Road in a 1790s farmhouse that has since been torn down; where it stood is now the parking lot for Bennett’s Pond State Park.
In her first years here, Burton was concentrating on raising a family and dealing with a succession of farm animals, including a burro, sheep, a calf, rabbits and a “Toulouse goose” named Horace that “became so fierce that tradesmen refused to get out of their trucks unless a Burton was on hand to protect them,” she once said, adding,  “When the children went to the end of the driveway to get the bus to go to school, Horace would follow them and stand in front of the bus, honking. Until one of the Burtons got out and flung Horace back onto the driveway, the bus could not move — to the delight of the children inside.”
In 1958, with her youngest child in first grade, Burton wrote Karl Nash, publisher of The Ridgefield Press, looking for a job. She soon got it and began 40 years of writing mostly personality features, interviewing thousands of people — from truckers and masons to movie actors and best-selling authors — and the two presidents. She found tradesmen as interesting as celebrities and enjoyed writing about a transcontinental truck driver as much as about a television star.
However, she was understandably pleased to have been invited to meet with Presidents  Carter and Reagan and wrote entertaining accounts of both sessions.
“How can that man wield the tremendous power of the presidency?” she wondered when she met  President Carter. “He looks like someone’s favorite big brother. No wonder everyone calls him Jimmy.”
She wrote many travel features, usually as the l.o.l. “Nat traveled to all the fantastic places that most of us only wish we could go to,” said novelist Elizabeth Daniels Squire, a longtime friend of Burton. Among her journeys was a 1984 trip around the world with fellow Ridgefielder Alice Gore King. “It was fun from start to finish,” King recalled. “Her sense of humor made molehills out of mountains. And she was kindness personified.”
Her l.o.l. features would even light-heartedly describe her misfortunes. In 1994, she fell and broke her elbow and nearly two months later, doctors discovered she had also broken her pelvis and needed to stay in bed at her home for more than a month. “In the next five weeks while the l.o.l. lay like a beached whale, an incredible number of trained District Nursing Association staff kept her from having to become a patient in a strange environment,” she later wrote in an appreciation of what is now the Ridgefield Visiting Nurse Association.
Burton was also active in the community. In the 1950s, when her family was involved raising farm animals, she ran a chapter of the Grange, an organization that had once been popular and sizable in town. She twice served as president of the League of Women Voters, and she sang with the Charles Pope Choristers. A painter, she was active in the Ridgefield Guild of Artists for many years.
Nat Burton died in 1999 at the age of 83. Three years later, St. Stephen’s Church, where she 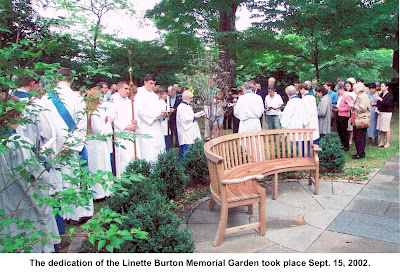 had been a longtime member, dedicated the “Linette Burton Memorial Garden” just south of the church and in front of South Hall. “It’s not just for members of the parish,” said Rector John Gilchrist. “We want to invite people off the street to come in and enjoy it as a quiet place.”

Burton loved gardens and the woods near her home, but did once run into trouble with a tree. Her little old lady feature  about her winning a raffle just before Christmas in the mid-1960s reflects how she could have fun with problems.
“Some little old ladies play bingo or save string or knit afghans to keep busy, but we know one who takes chances on things,” she wrote. “Lots of things, like Mustangs and Cadillacs, trips to 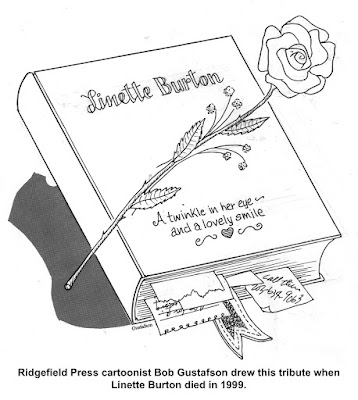 Europe or Hawaii, electric carving knives, and pine-paneled dens. Through all the years, she never won anything until that Sunday night, Dec. 5, a date which will be indelibly imprinted in her mind along with such other important dates as the Battle of Hastings, her wedding anniversary, and the last day to pay taxes without paying interest.

“It was 9:32 p.m. when the telephone rang and the caller announced, as though proclaiming the dawn of a new era, ‘This is Mrs. Richard Jackson. You have just won a live Christmas tree!’
“‘A live what?’ the l.o.l. responded dully, thinking quickly of the live ducks, dogs, cats, sheep, cows, burros, alligators, hamsters, and rabbits that had graced her home.
“‘A live Christmas tree,’ the caller repeated. ‘Remember the chance you took on the tree when you went through the Keeler Tavern the other day during their open house? Well, your name was picked. And the tree is here, waiting for you.’”
The story goes on to describe the family’s struggles in dealing with moving an eight-foot evergreen with a large ball, weighing 200 pounds, how it was loaded into their little VW microbus, and how it sat in front of the house, awaiting someone to dig a four-foot “crater” in which to plant the huge ball in the freezing ground.


“The l.o.l. is seriously considering offering chances (free) to participate in a muscle-building program (particularly the biceps) to anyone who is as chance-happy as she once used to be,” she said.