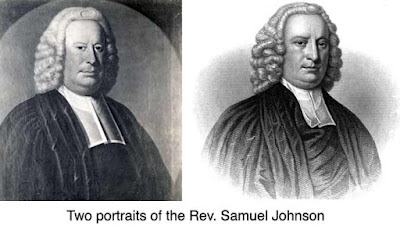 Rev. Samuel Johnson:
Founder of Church and University
The scholarly missionary who established the Episcopal church in Ridgefield was also the man behind the founding of one of this country’s oldest and most prestigious universities.
For nearly a century, Connecticut had only one, official, practicing religion: Congregational. However, in the early 1700s, the tiny Church of England in Connecticut, with help from the Mother Country, established a congregation in Stratford. The Rev. Samuel Johnson, pastor at Stratford, then began acting as a missionary to a dozen or more Connecticut towns.
In Ridgefield, Dr. Johnson established a congregation in 1725 that grew into St. Stephen’s Episcopal Church. According to old church records, he “preached there occasionally for several years, and was instrumental in bringing several families into the church.”
Soon others took over in Ridgefield, and Johnson eventually became the top Episcopal minister in the state (until 1728, he had been Connecticut’s only Episcopal minister).
The Guilford native graduated from Yale in 1714 and started out a Congregational minister, converting in 1723; he sailed to London for his ordination at St. Martin-in-the-Fields Church. He was a “high church” Episcopalian who, as St. Stephen’s historian Robert Haight put it, “stressed the Catholic side of the church’s tradition.”
As early as 1750, Dr. Johnson was corresponding with Benjamin Franklin about establishing a new kind of college in New York. He began working with his wife’s family, former students, and Trinity Church in New York City to found a school.
A board of trustees was formed and, in 1752, nominated him to be the college’s first president. The board decided to call the school King’s College—to help gain a royal charter from King George II.
Between 1750 and 1753, Dr. Johnson and Dr. Franklin designed a “new-model” plan for an American college that would be used at King’s. It was profession-oriented, classes were taught in English instead of Latin, professors specialized in one subject, and there would be no religious test for admission. The curriculum included math, science, history, commerce, government, and nature.
The charter was obtained in 1754. Johnson himself taught the first class of eight students; he included use of his own textbook on philosophy.
Thirty years later, in the wake of the Revolution, the school dropped the “King” and selected Columbia as its name. The university is the oldest in New York State and fifth oldest in the United States.
Over his career Dr. Johnson wrote nearly three-dozen books. He has been called by various historians “a towering intellect of colonial America, a man of great curiosity and philosophical interests,” “the most erudite colonial Anglican theologian of the eighteenth century,” and the “first important philosopher in colonial America.”
He died in 1772.
Incidentally, his son, William Samuel Johnson, was a signer of the U.S. Constitution; he chaired the Constitution’s five-member Committee of Style, which framed the final text of the document. He also became the third president of Columbia.