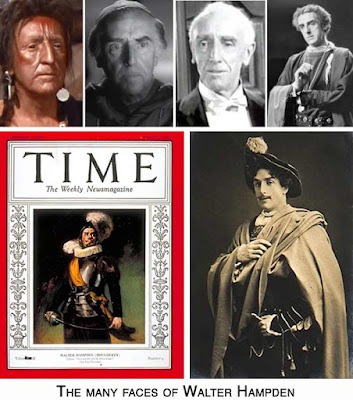 Walter Hampden:
Star of Stage and Screen
Although he honed his acting skills playing Shakespearean roles in England, Walter Hampden was a Brooklyn-born son of a prominent New York attorney. He went on to star alongside many of the stage and screen’s greatest names in the United States.
Walter Hampden Dougherty was born in 1879 and at 16, while studying at Brooklyn Polytechnic Institute, played Shylock in a student production of The Merchant of Venice. He went to France to study music, but the lure of the stage soon brought him to England, where he joined the Frank Benson Stock Company, touring Great Britain and becoming known for what has been called his “orotund voice.”
He returned to the States in 1907, and bought a Ridgefield farm on Mopus Bridge Road four years later. In 1919, he formed his own company with a predominantly Shakespearean repertory. In the 1920s, he opened his own theater in New York, playing Hamlet with Ethel Barrymore in the premier production. In 1923, he performed Cyrano to much critical acclaim, and revived the play several times during his career.
While he continued to perform on the stage for most of the rest of his life — his last Broadway performance was in Arthur Miller’s The Crucible in 1953, he increasingly turned to film late in life, often playing “distinguished old blowhards,” as one critic put it.
Among his film roles were as the archbishop in The Hunchback of Notre Dame (1939), an American Indian in Cecil B. DeMille's Unconquered (1947), a pompous actor in All About Eve (1950), the British ambassador in Five Fingers (1952), and the father in Sabrina (1954).
Over the years Mr. Hampden also appeared on stage in his home town, usually in efforts to benefit one cause or another. For example, in 1938, when a movement was underway to establish a professional summer theater here, he appeared in a production staged at the Congregational Church’s Clubhouse.
During World War II, he was also active in efforts to sell war bonds at the original Ridgefield Playhouse. On April 16, 1945, four days after President Franklin D. Roosevelt died, hundreds filled the high school auditorium for a memorial service that included Mr. Hampden’s reading “O Captain, My Captain” — he had known the president, and had visited him in the White House.
For more than a quarter of a century, Mr. Hampden was president of the Players Club in New York City; its library is named in his honor.


He died of a cerebral hemorrhage while in Hollywood playing a leading role in the film, Diana, with Lana Turner. His wife, the actress Mabel Moore, and son, Paul — a former Ridgefield Planning and Zoning Commissioner — were at his side when he died. He was 75 years old.