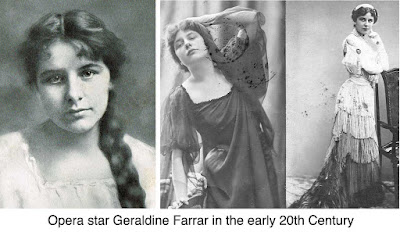 Geraldine Farrar:
A Great Human Being
Geraldine Farrar was still a teenager when she became a star, heralded around the world for her voice as well as her acting ability.
One of the Metropolitan Opera’s greatest lyric sopranos, Miss Farrar had spent 16 years with the company, singing the leads in Madama Butterfly, Carmen, Tosca, and many other productions.
“Miss Farrar was the last of a great operatic tradition set by such stars as Enrico Caruso and Antonio Scotti,” The Ridgefield Press said in her obituary.
Born in Massachusetts in 1882, she was a daughter of Sidney Farrar, a 19th Century professional baseball player with the Philadelphia Phillies, who later lived on North Salem Road—Farrar Lane is named after him, not his more famous daughter. He bought the place in 1923 and the story about his moving in said ”His daughter, Geraldine Farrar, will arrive later, it is expected.”
Sidney Farrar and his wife, both church singers, sent Geraldine to singing lessons when she was 12.
In 1901, she made her debut with the Royal Opera in Berlin and so impressed Lilli Lehmann that the star took Miss Farrar as a pupil. She went on to sing with companies all over Europe. She made her acclaimed debut with the Met in 1906, and over the following years, shared leading roles 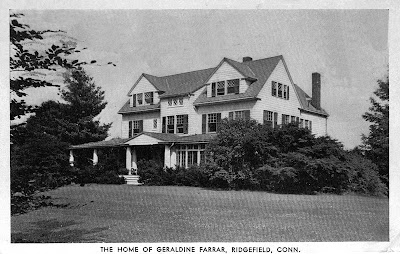 with such greats as Caruso, Scotti, and Louise Homer. She knew many notables in the arts, including Camille Saint-Saens, Giacomo Puccini, Mark Twain, Sarah Bernhardt, Nellie Melba, Fritz Kreisler, and Jules Massenet. She was also the lover of Italian conductor Arturo Toscanini (who twice performed in Ridgefield). She made several films, including Carmen and Joan of Arc.

When she sang her last role in 1922, “a cheering crowd surged forward shouting her name,” The Press said. “Outside 40th Street between Broadway and Eight was a solid mass of fans.”
For years, recordings of her music were produced, and are still being sold today.
She wrote two autobiographies, “Geraldine Farrar: The Story of An American Singer” (1916) and “Such Sweet Compulsion” (1938). Several biographies have also been written.
In 1924, a year after her parents moved here, she acquired Fairhaven, a large home on West Lane. In 1954, she decided to downsize and, with her companion of 50 years, Sylvia Blein, moved to a much smaller place on New Street.
During her years in Ridgefield, Farrar didn’t just twiddle her thumbs. She did  much work for 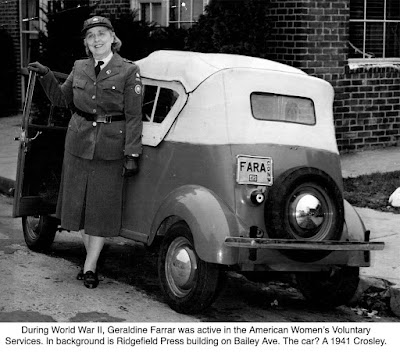 the Red Cross, and during the war, drove for the American Women’s Voluntary Services and served on the War Price and Ration Board. She also helped the Girl Scouts and served as finance chairman of the organization. She sang at fund-raising concerts for Danbury Hospital in the late 1930s.


On the night she died in 1967 at the age of 85, the Metropolitan Opera was performing Madama Butterfly, an opera Farrar had starred in nearly 100 times. That week, The Press suggested her epitaph might be a sentiment she herself once expressed: “Far more important than being a great artist is to become a great human being.”