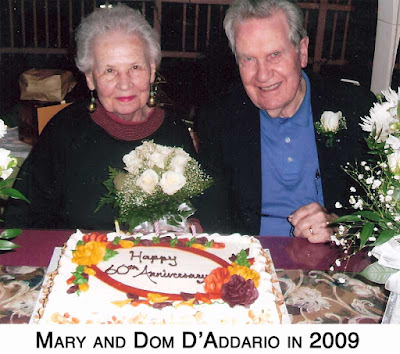 Dom D’Addario:
A Very Good Citizen
Few people have spent more time helping their community — and their country — than Dom D’Addario.
Born in Branchville in 1925, Dominic A. “Dom” D’Addario attended the one-room Branchville Schoolhouse, still standing on lower Old Branchville Road. He began working at the age of 11 — pumping gas at a filling station in Branchville — to help support his family.
He graduated from Ridgefield High School in 1943 and immediately entered the U.S. Army Air Force. He started out a bombardier, but was then sent to navigation school, and he eventually wound up training navigators who guided World War II bombers.
After the war he remained active in the U.S Air Force Reserves for many years, finally retiring as a lieutenant colonel.
Mr. D’Addario enrolled at the University of Connecticut on the GI Bill — “there was no way my parents could afford to send me to college,” he said in a 2004 interview.  “They had enough to do to put food on the table.”
He studied engineering, and while still a student, met and married Mary Hrabcsak of Danbury.
He worked as an engineer at Barden Corp. in Danbury. He also designed kitchens for Rucon Custom Kitchens in Danbury, and headed a furniture company.
In Ridgefield, Mr. D’Addario became interested in town government in the 1980s. Nearly always in company with his wife Mary, he not only attended major town meetings and public hearings but was a regular in the audience of nearly all Police Commission, Board of Selectmen and Planning and Zoning Commission meetings — week in and week out, for years.
In the 1990s, he was a founder and for many years chairman of the Independent Party of Ridgefield, which ran and endorsed candidates for town offices.
For all his interest in public affairs, Mr. D’Addario was noted for not making politics personal, always expressing his opinions respectfully, and remaining friendly with many people on both sides of different issues whether he agreed with them or not.
“He was always a gentleman,” First Selectman Rudy Marconi once said.
Perhaps it was most appropriate that he was a member of the town Ethics Committee for many years.
Both he and his wife were justices of the peace, and officiated at many marriages.
“He was one of the favorite JPs to do ceremonies, and he was always there, if they wanted to be married that afternoon, or the next day, or the next month,” said Town Clerk Barbara Serfilippi.
“Mary and I do that together,” Mr. D’Addario said. “The ceremony is only 15 minutes long, but we try to stretch it out with readings.”
He had also been active in the Laszig Fund, which provides grants that help the elderly,  the Ridgefield Historical Society, and in St. Nicholas Byzantine Catholic Church in Danbury, where he had been a trustee and served on many committees.
And if all that wasn’t enough, he had also donated more than 22 gallons of his blood to the local Red Cross Bloodmobiles.
Mr. D’Addario died in 2012 at the age of 87. Mary D’Addario died in 2016; she was 95 years old.
In 2001, the D’Addarios were both honored as “Citizens of the Year” by the Ridgefield Police Benevolent Association and the Ridgefield Police Union. “Dom and Mary D’Addario are more involved and personally invested in our community than just about anyone else in Ridgefield, and have been for decades,” the police said at the time.