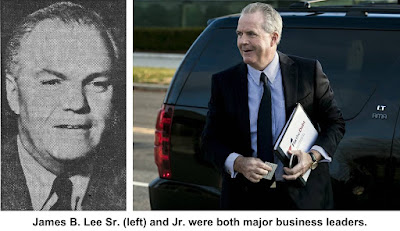 James B. Lee Sr. and Sr.:
Of  Fedoras and Finance
It’s not too often that you find father-and-son leaders in the world of business, especially when their two business worlds are entirely different. But that was the case with James B. Lee Sr. and Jr. Dad was the head of one of the nation’s largest hat manufacturers — at a time when people still wore hats instead of caps. Son was a financial genius whom The New York Times called “a pioneering deal maker and among the most influential Wall Street investment bankers of his era.”
Both had been Ridgefielders, father late in life and son, early. And both died young.
James Bainbridge Lee Sr. was born in Danbury in 1916, a son of Frank H. Lee who, in 1886 at the age of 19, founded a hat factory in that city. Long called the “Hat City” of America, Danbury at the time had 30 companies that were turning out 5 million hats a year. F. H. Lee Hat Company soon grew to be the biggest operation. By 1917, Lee was producing 12,000 hats a day. According to one hat historian, Lee “did a huge business in low-end hats but they were quite capable of producing high-grade hats as well. Usually the wider the ribbon on a Lee, the higher the grade of the hat.”
James graduated from Canterbury School in New Milford, then Georgetown University, and served in the Army during World War II — entering as a private and winding up a captain. After the war, he became secretary of the company and then in 1950, president. But in 1960, when classic felt hats had become less popular, he sold Lee to Stetson, famed for its “western” style hats. Lee Hat had had as many as 1,500 employees in its heyday, but by the time of the sale, only 220 people worked there.
Four years later, Stetson shut down the huge Danbury factory near where the state Motor Vehicles Department is today.
The Lee family was also heavily involved in communications. In 1927 Frank had founded 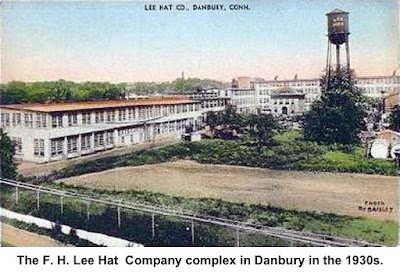 the Danbury Times, which eight years later merged with the Evening News to form the  News-Times. The paper remained in the Lee family until 1960 when it was sold to Ottaway Newspapers.

James, who lived for many years on Wilton Road West, seemed more interested in the broadcasting side of media. He was president of and the main stockholder in the Berkshire Broadcasting  Company, which was then principally WLAD Radio but is now a half dozen area AM and FM stations, including the former WREF — now WAXB — in Ridgefield.
An accomplished golfer, Lee was a longtime member of the Ridgewood Country Club in Danbury, was its golf champion several times, and also placed near the top in state amateur tournaments.
In 1964, when he was only 47 years old,  James died of heart failure. (His brother, Frank H. Lee Jr., also a Ridgefielder and chairman of the Lee Hat board, collapsed and died while marching in Ridgefield’s 250th Anniversary parade in 1958 — he was only 51. Their father lived to be 70.)
James Sr.’s survivors included his wife, Mary, two daughters, and a son, James B. Lee Jr., who was only 11 years old and a student at Veterans Park School. Jimmy, as he was known then and throughout his life, was also attended catechism classes at St. Mary’s.
“Jimmy was in my first-grade class 1958-59,” recalled Patrick Wahl, who considered Lee his best childhood friend.  “All the Catholic kids got to know each other and by second grade we 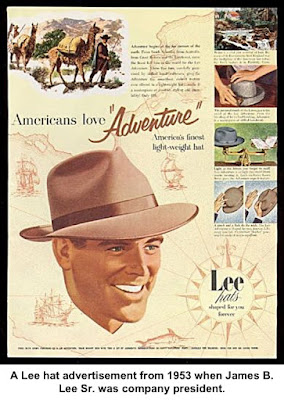 walked to the afternoon religious classes together.  Odd notion by today’s standards, but a bunch of seven-year-olds running up Catoonah Street raised no eyebrows back in the day.”

Jimmy, who was born in 1952 in Manhattan, continued in the Ridgefield schools through freshman year at RHS in 1967 when he was elected class president. He would have graduated in the Class of 1970, but his mother, then Mrs. Ed Raleigh, sent him to Canterbury School where his father had gone.  There he was a captain of the hockey and track teams and co-editor of the school newspaper. He went on to graduate from Williams College, majoring in economics and art history.
He began his career at Chemical Bank and built its investment banking business as it grew larger through mergers with Manufacturers Hanover and Chase Manhattan Banks. He ran Chase’s investment banking operations, and after another merger, became vice chairman of JPMorgan Chase.
“He advised on some of the biggest deals, including United Airlines’ acquisition of Continental, General Electric’s sale of NBCUniversal to Comcast, and the News Corporation’s purchase of Dow Jones,” said Andrew Ross Sorkin in his New York Times obituary of Lee.  (Coincidentally, Dow Jones owned the Danbury News-Times after Ottaway sold the paper.)
He was the “behind-the-scenes consigliere to the world’s top corporate chieftains, hatching mergers and public offerings for companies as diverse as General Motors, Facebook and Alibaba,” Sorkin wrote. “He was a constant presence in the lives of moguls like Rupert Murdoch of the News Corporation and Jeffrey Immelt of General Electric.”
Jamie Dimon, his boss at JPMorgan Chase and also a close friend, looked to Lee constantly for advice. But Lee often offered more than advice. When Dimon was going through difficult times because of a Justice Department investigation, Lee arranged for Tom Brady, the New England Patriots quarterback, to call Dimon to cheer him up.
Dimon told a 2005 gathering of corporate leaders that “Jimmy Lee has probably lent a trillion dollars to the people in this room. And almost all of it has been paid back.”
Times writer David Gelles said Lee “shaped corporate America, and the nation’s biggest bank, through a career that established him as perhaps the pre-eminent deal maker of his generation.”
Jimmy Lee died in 2015 at the age of 62. His funeral in St. Patrick’s Cathedral in Manhattan was presided over by Cardinal Timothy M. Dolan. The honorary ushers were a Who’s Who of leading business people: Michael R. Bloomberg, the billionaire ex-mayor of New York; Barry Diller, the media owner; Roger Goodell, commissioner of the NFL; Jeffrey Immelt of GE; Charlie Rose, the TV host and a longtime friend; and Stephen A. Schwarzman, head of the huge private equity firm, Blackstone (Schwarzman had offered him a more lucrative job as #2 at Blackstone, a post Lee declined because he loved his work at JPMorgan Chase).
Dimon delivered a eulogy at the funeral. “In business, you were brilliant, a shining star, one of the best we’ve seen,” he said. “You were a nuclear power, a sun of positive energy. You had unbridled enthusiasm and optimism. Your deal-making was legendary. You were simply a huge influence on the success of so many of us.”
But perhaps the most touching tribute came from his son, who told how his father left notes for him and his two sisters before catching the 5 a.m. train from Darien to Manhattan each morning. He also described his dad’s guitar talents, and how he would practice for performances with a band of JPMorgan staff members, called the Bank Notes.


“He was a star, he was a superstar, and he went out at the top of his game,” said his son, whose name is also James. His dad had also been the best man at his wedding.