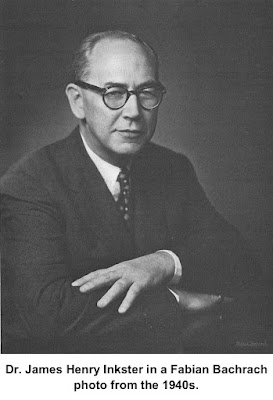 Dr. James Henry Inkster:
Helping the Health of Body and Soul
In an era when there are literally dozens of physicians practicing in Ridgefield, it’s hard to believe that not too long ago, there were only two doctors in town.
That sparsity of medical care in 1944 helped Dr. Henry Inkster to decide to come to Ridgefield.
“There was such a great need here,” he said in an interview 20 years later.
But not everyone who arrived at his office when he hung out his shingle was necessarily ailing.
“At first some people paid the $3 office visit charge just to take a look at the new doctor,” he said. “There weren’t many new faces around because of the war.
The town had only 3,500 people back then, and many were off fighting or supporting the war.
James Henry “Harry” Inkster was born in 1899 in Spokane, Wash.,  and served in the U.S. Army during World War I. After the war he studied at the University of Washington and then came East to attend Cornell Medical School where  he met his wife, Evelyn Rogers, a native of Massachusetts and a Bryn Mawr graduate. The two physicians both graduated in the Class of 1930.
He practiced in New York City for nearly a decade while commuting to Newtown where he and Evelyn had restored an antique house. She worked as a pathologist in the city.
Tiring of commuting, the Inksters decided in 1944 to move his practice and their home to Ridgefield after he conferred with Dr. Francis B. Woodford, the town health officer. Woodford was one of only two physicians practicing here — the other was Dr. Joseph S. Bell. Dr. Woodford had recommended that he come here “just as fast as we can get you a house,” Inkster recalled later.
That house stood on the north side of the Ridgefield Library property (later it was the home 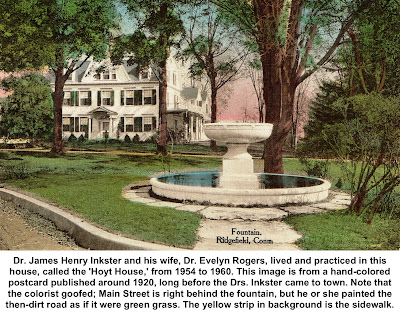 and office of Dr. James Sheehan; the library bought and razed it in the early 1980s to make way for an expansion.) After living and practicing there for 10 years, the Inksters bought the antique house just south of the Keeler Tavern Museum and opposite the Cass Gilbert Fountain. For their last four years here, they lived on Barrack Hill Road.

Though he considered specializing in pediatrics here, Inkster decided to remain a general practitioner. He was well known for making house calls in his sporty red Karmann Ghia, license plate JHI. Evelyn, who assisted in his practice under the name of Dr. Rogers, had a red Volkswagen, license ERI. (James Inkster was a longtime member of the Sports Car Club of America and active in its local unit.)
James Inkster was a leader in the operations of St. Stephen’s Church, serving as senior warden for many years, and as a member of the vestry, a lay reader, a chalice bearer, and president of the Men’s Club. With Seth Low Pierrepont he co-chaired the committee that selected the Rev. Aaron Manderbach as the new rector in 1950 and in 1958 he led negotiations that resulted in the church’s receiving South Hall as a gift from the Electro-Mechanical Research company, which had used it as 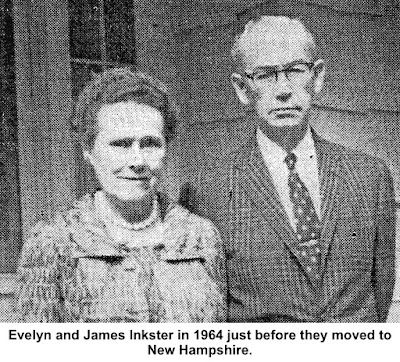 offices for many years.

Evelyn Inkster was also active in the community, especially with the Ridgefield Library and the District Nursing Association


By 1964  after James Inkster had suffered some health problems, the couple left town and found a retirement home in New Hampshire. There for many years he was part-time medical director for a local school system. In 1979 they moved to Groton, Conn., to be closer to their daughter.  He died in 1985 at the age of 85. Evelyn Inkster died two years later at the age of 86.