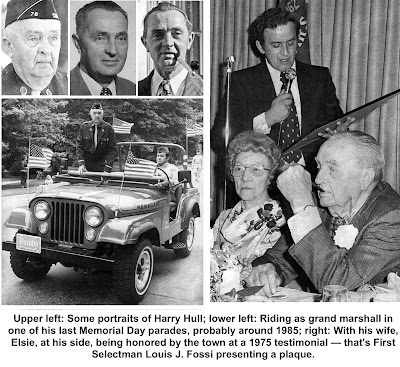 Harry E. Hull:
Hero Who Led the Town
Harry E. Hull accomplished two things few others could: He was elected a Democratic first selectman four times in a hugely Republican town and he led the Memorial Day parade for more than 65 years.
A Ridgefield native and house painter who became a selectman in the 1930s and first selectman in 1947, Mr. Hull was respected in his prime years and virtually venerated in his later life.
“You could learn a lot from Harry,” fellow Selectman Richard E. Venus once said. “He was superb in the way he could organize and get things done.”
His administration’s accomplishments included building the town’s first “modern” school – Veterans Park; buying the Community Center property that includes Veterans Park; establishing a real police department instead of using state police and town constables; and leading the recoveries from two natural disasters – the 1950 “tornado” that blew the roof off part of the high school and the famous flood of 1955.
He served on almost every board and commission in town, including the school board – which he chaired — and Board of Finance. He also headed the Democratic Town Committee, was a deacon of the First Congregational Church, and a member of the volunteer fire department, among many other organizations.  When still in his early 20s, he was a prosecutor in the Town Justice Court.
In his later years, he was best known as a veteran. Harry Hull had sailed for France on his 19th birthday in 1917, fought in many of the major battles of World War I, was wounded at Chateau Thierry, and sent home in 1919 to recuperate.
“It was supposed to be the war to end all wars,” he said in a 1981 Press interview. “The theory was right but the actuality wasn’t.”
He helped establish the local American Legion, and was not only the first grand marshal of the Memorial Day parade, he was the only one for 67 years. For almost all of those years and into his 80s, he marched at the head of the parade; for his last few years, he rode.