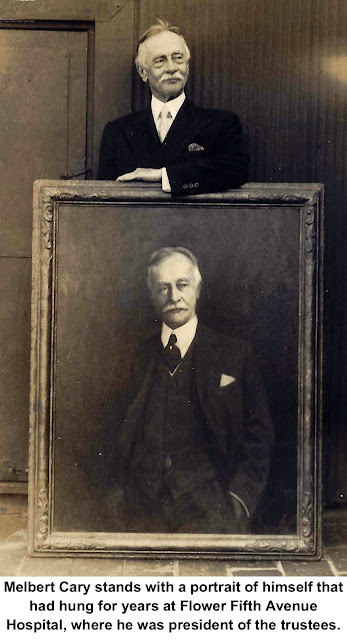 Melbert Cary:
A Man of Many Parts
Melbert Cary was — as they used to say — a man of many parts. He was a lawyer, a politician, a novelist, a historian, a leader in medical education, and a philanthropist. He came close to being the third Ridgefielder elected governor of the state. But one of his more unusual, and probably least successful “parts” was being an inventor.
Cary’s namesake son and his daughter in law gained even more notoriety for their accomplishments and gifts than he did.
Melbert Brinckerhoff Cary Sr. was born in 1852 in Racine, Wisc. By his own account, after graduating from Princeton, Phi Beta Kappa, in 1872, he “spent a year cattle-ranching in the far West.” He returned to Wisconsin, practiced law briefly in Milwaukee and then became assistant general solicitor of the Chicago, Milwaukee & St. Paul Railway until 1882. He moved to New York in 1883 and formed his own law firm, which grew into Cary, Miller and McEwen.  His specialty was railroads.
Cary came to Ridgefield in the early 1890s, owning “Wildflower Farm” along both sides of 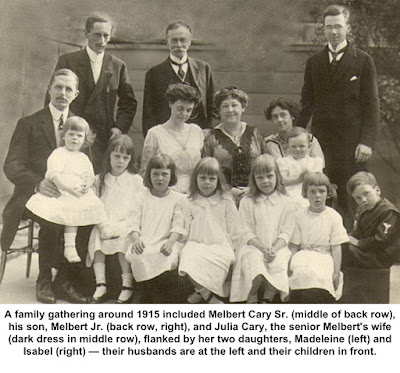 lower West Lane. His mansion stood atop a hill across from Cedar Lane. The spread included a sizable farm on the north side of West Lane; two barns on the property were later converted into houses at 334 and 336 West Lane.

Cary quickly became active in the Democratic party in Connecticut, and served as chairman of the Democratic State Central Committee for several years.
In 1902, a year after Republican Governor George E. Lounsbury of Ridgefield left office, Cary ran for governor on the Democratic ticket.  He lost to a Meriden Republican named Abiram Chamberlain, but remained a power in state politics as well as influential in Ridgefield goings on. He was a delegate to the 1908 Democratic National Convention that nominated the golden-throated William Jennings Bryan for president. (Bryan spoke in Ridgefield in 1907 — “Main Street looked as though half the population of the town had turned out,” The Ridgefield Press reported. However, Bryan was as successful in his bid as Cary had been in his.)
Cary was also a writer, whose four books included “The Connecticut Constitution” (1900) and “The Woman Without A Country” (1934) and, when he was in his 80s, the novel, “Back Stage” (1938).
His wife, the former Julia Metcalf, was active in the woman suffrage movement.
Although Cary moved around in New York’s high society, hewas  evidently in touch with the ordinary folk of Ridgefield. When the son of a local farmer ran into trouble with the New York City police and, with his wife, was thrown in jail, Cary volunteered his services to rescue them.
It was like an episode from “Downton Abbey” or “Upstairs, Downstairs.” In 1896 young newlyweds David and Susan Dann were held in Manhattan’s notorious “Tombs” prison, accused of involvement in the theft of silverware from a banker’s Manhattan townhouse where Susan worked as a maid. Susan was a recent immigrant from Ireland and David was a poor housepainter who grew up on a Ridgefield farm.
There was no real evidence that Susan or her husband had anything to do with the stolen silver, yet they, along with Susan’s sister, spent 10 days in the Tombs.  “They put [her and her sister] in with the lowest kind of women,” Susan told a newspaper. “We heard things that were terrible to us, and were compelled to associate with women who were awful. They said things that men would not say.”
David Dann’s father, Levi, was a farmer who lived near Cary’s Ridgefield mansion. He knew Cary was a prominent New York lawyer and approached him about helping his son. Cary did so immediately, and soon told The New York Times, “I have gone through the evidence … and the only way it connects Susie Dann with the silver is through the fact that she had charge of it. The only way her husband is connected with it is through the fact that the morning after the robbery, he walked with her in public for an hour ... Yet our clients were kept in jail ten days. It was simply an outrage.”
Cary not only got the Danns freed from prison and the charges dropped, but also sued Susan’s employer, blaming the banker for convincing the police that she should be arrested.
(The unusual story of David and Susan Dann is recounted in much more detail in “Wicked Ridgefield, Connecticut,” a book published by The History Press in 2016.)
Cary became quite involved in the stock market in which he invested heavily. However, 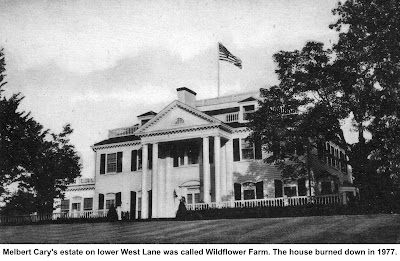 according to Ridgefield historian Dick Venus, “there were times in the early part of [the 20th] century when the world of finance sent out some unmistakable signals that it might be ailing. Then came the Panic of 1907 and 1908, and Mr. Cary was one of those who suffered serious financial setbacks.”

This probably led him to decide to sell his Ridgefield mansion in 1909. However, he held onto a couple of hundred acres of the estate with the hope of one day building a new house for himself. That never happened, and his home remained Manhattan, at first on Broadway and finally in the Hotel Gotham on Fifth Avenue (now called The Peninsula New York).
Cary remained active in community service. He served for 12 years as president of the Board of Trustees of New York Homeopathic Medical College, now New York Medical College, and 20 years as president of the board of the college’s Flower Fifth Avenue Hospital, the first teaching hospital in the United States to be owned by a medical college. 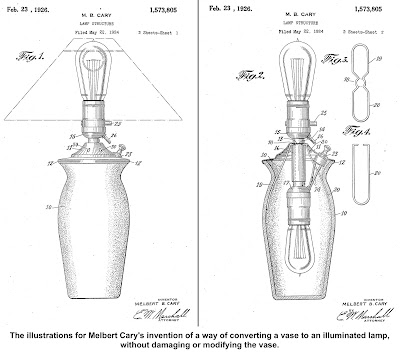 When Cary retired from the law in 1926, he was apparently able to spend more time with other pursuits. He sought — and successfully obtained — a patent on a rather unusual  lamp device that, as he put it, “can be easily and quickly attached to a vase or other receptacle without requiring any preliminary adjustment of or mutilation of the article to which the device is attached.” Simply put, it was a pair of opposing light-bulb sockets, attached to a flange that fit over the top of vases or jars so one could instantly create a decorative lamp. The top socket held the bulb that would provide illumination and support the shade while the bottom socket’s bulb would make the vase glow and provide weight to keep the array from tipping over.
In 1926, two years after he applied, the U.S. Patent Office granted patent number 1,573,805 for the “lamp structure.” It is not known whether the device was ever subsequently marketed, successfully or otherwise.
When Cary died in 1946 at the age of 93, he was the oldest living Princeton graduate.
Melbert Cary’s son, Melbert Jr. (1892-1941), who had lived at Wildflower Farm as a boy and was known as “Mike,” became even more famous than his father. The Yale graduate was a celebrated graphic artist and an expert on printing, who brought many European typefaces to America and wrote books on the printing and type.
Cary founded the Press of the Woolly Whale, which republished out-of-print titles that he felt should be reintroduced to the public.
His own professional library of 20,000 volumes was donated to Rochester Institute of Technology, where it is today considered “one of America's premier libraries on the history and practice of printing.” For many years, RIT has had the position of “Melbert B. Cary, Jr. Distinguished Professor,” and the school periodically presents the “Melbert B. Cary Jr. Award”  to those “who have advanced technology in graphic communications and related industries.”
One of his more unusual interests was antique and unusual playing cards, and his collection of more than 2,600 packs of cards was donated to Yale where it is now at the Beinecke Rare Book & Manuscript Library.
In 1923, Melbert Jr. married Mary Flagler (1901-1967), a wealthy granddaughter of Henry Flagler, who with the Rockefellers founded Standard Oil and who was largely responsible for developing Florida by creating railroad lines and towns there. Melbert and Mary eventually acquired a 1,8000-acre estate outside Millbrook, N.Y., which they turned into a vast wildlife refuge called Cannoo Hills. In her will Mary Flagler Cary established a charitable trust to oversee the estate, which became the Cary Arboretum. Today it is the Cary Institute for Ecosystem Studies, a nonprofit institution that has 120 staff members and maintains one of the largest ecological research programs in the world. Its areas of expertise include disease ecology — especially tick-related diseases, urban ecology, forest health, and freshwater ecology.
Mary also made another, rather astounding gift: She left $50 million — about $365 million in today’s dollars — to create a trust fund for the State of New York. She said the money could be used for any public, religious, scientific, charitable or educational purposes. The only restrictions were that the trust could not “carry on propaganda or otherwise attempt to influence legislation” and that it “not participate in or intervene in any political campaign on behalf of any candidate for public office.”


In 1936, Melbert Cary’s Wildflower Farm became the home of another New York lawyer, William Matheus Sullivan, who called it Dunrovin and built a small theater on the property where Metropolitan Opera stars would periodically perform. The opera house is still there, but the mansion burned to the ground late one Sunday night in 1977 after the owners left a bucket of hot fireplace ashes on the porch and returned to their New York City home.