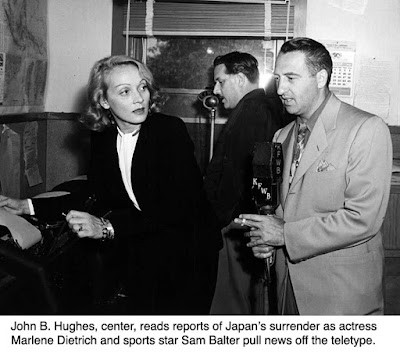 John B. Hughes:
The News and Views
In the 1940s and 50s, the rich and cultured voice of John B. Hughes was as familiar to millions of Americans as the voices of Walter Cronkite, Charles Osgood, or Huntley and Brinkley would become to another generation.
Hughes was a newscaster and commentator whose long career spanned  the golden age of radio well into the early days of television.
A native of Cozad, Nebr., John Broughton Hughes was born in 1902. He began his news career in print journalism, working for the Portland Oregonian. He also enjoyed the theater and his work with an acting company led to going into radio.
He worked for the Warner Brothers’s Los Angeles radio station, KFWB, and during the late 1930s, had a daily NBC news commentary, called “Hughes Reel.”
By 1940, he had joined the Mutual network where he was considered a specialist on the Orient — he predicted that the Japanese would attack the U.S. When Pearl Harbor occurred, he quickly became an important newscaster for the Mutual network on the West Coast.
Early in the war, Hughes supported the interning of Japanese-Americans who, he felt, would support their home country instead of the U.S. (The famous newsman, Edward R. Murrow, held a similar view.) Later in the war, however, Hughes did an about face, and in his commentaries became a leading voice supporting the rights of minorities and criticizing prejudice against Japanese-Americans.
During the war, Hughes was a correspondent attached to General Douglas MacArthur’s headquarters, covering the advance from Australia to Japan. He made several amphibious landings and saw combat with guerilla forces and American troops. He was wounded twice, and twice refused the Purple Heart.
He was sent home before the war ended, and was in the newsroom when the announcement of the Japanese surrender was made over KFWB — with actress Marlene Dietrich and basketball star and broadcaster Sam Balter assisting.
After the war, his “News and Views with John B. Hughes” was carried nationwide, first over 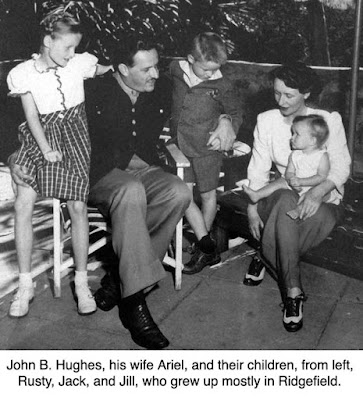 NBC, then CBS and later the Mutual radio network.  Many of his radio broadcasts can be heard today over the Internet.

The New York Times once observed that Hughes “has the polished diction of an ex-actor, which indeed he is.” Besides doing stage acting, he appeared in three films, “Meet John Doe” (1941), “Rhapsody in Blue” (1945) and “Gilbert and Sullivan” (1953) — he played himself in all three.
He was also the narrator of the World War II documentary, “The Battle of Britain,” produced by Frank Capra for the U.S. government.
He and his wife, Ariel, also founded a radio station, KXXX, in Colby, Kansas, which they ran for several years.
They came East around 1949, living first in Westport and then buying Ontaroga Farm, the former Starr estate, on the corner of Lounsbury and Farmingville Roads in 1950.
In the early 1950s, Hughes became one of the first TV anchormen, working for the Dumont network and WOR-TV with a nightly news programs. He also helped form the American Federation of Television and Radio Artists.
In 1958, he became the first anchorman and director of television news at WTAE in Pittsburgh, retiring in 1961, but working part-time as a radio and television news consultant for a while after that.
He died in 1982 in Pittsburgh, Pa., just two days before his 80th birthday. His survivors include a son, a grandson, and three grandchildren living in Ridgefield today.