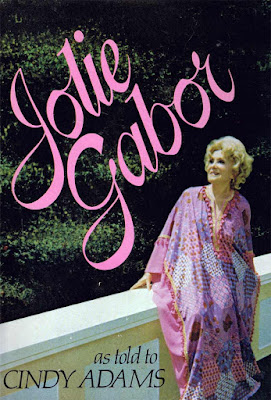 Jolie Gabor:
A Chance to Play
Jolie Gabor, the colorful mother of the even more colorful Gabor sisters — Eva, Magda and Zsa-Zsa, considered her home in Ridgefield a quiet retreat compared to her places on Long Island and in California. "I only get a chance to play bridge in Ridgefield because the social life is so busy in Southampton and Palm Springs," Ms. Gabor once said.
She was born Janka Tilleman in Budapest in 1900 — her wealthy parents, wanting a boy, called her Jansci or “Johnny.” She became a socialite, musician and actress and, in 1936, age 35 and married, was selected Miss Hungary. She operated several jewelry stores in Budapest in the late 1930s, but fled the country when the Germans invaded.
She came to the United States in 1945; when she arrived she had only $100 and a diamond ring. However, she was hardly without means — daughter Zsa Zsa, who arrived earlier, was married to Conrad Hilton, the hotel magnate. With Zsa Zsa’s help, she established a Madison Avenue jewelry business that thrived off the reputations of her increasingly popular and marriage-prone daughters. (One of the saleswomen at her store was Evangelia Callas, mother of future opera diva Maria Callas.)
At one point, among mom and her three daughters, the Gabors had had 21 husbands. Actor George Sanders was married to both Magda and Zsa Zsa and was attracted to Jolie. “You know, Jolie,” he once wrote her, “I think marriage is for very simple people, not great artists like us.” Zsa Zsa, on the other hand, observed of Sanders: “When I was married to George Sanders, we were both in love with him. I fell out of love with him, but he didn’t.”
With the help of professional writers, she produced two books, Jolie Gabor, a memoir, and Jolie Gabor’s Family Cookbook, a collection of Eastern European recipes.
In 1966, Jolie and her then husband, Count Odon de Szigethy, bought a modest home on Oscaleta Road and immediately set about glamorizing the place. “I like to make from a nothing something,” she told The Ridgefield Press.