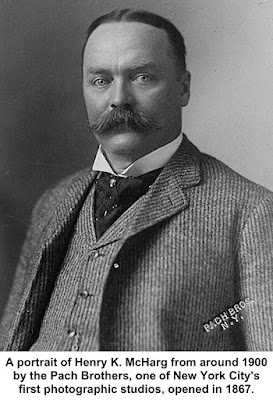 Henry K. McHarg:
A ‘Santa’ to Many
Ridgefield has been the home of many generous people, but often they were little known for their munificence, preferring not to publicize their generosity. One of them was Henry McHarg, a railroad tycoon who, it it said, over his lifetime quietly gave away some $2 million — equivalent today to more than $50 million.
While most of his gifts were behind the scenes,  one couldn’t avoid being showy.
In 1906, McHarg sold one of his railroads (Virginia & Southwestern) for $6-million ($162-million in today’s dollars). To show his appreciation for the Virginia & Southwestern employees,  he arranged just before Christmas for a special “Santa Claus” train on which a conductor, dressed as St. Nick, traveled the length of the railroad with presents from McHarg to all his former employees. The gifts included full years’ salaries to the higher officials, month’s salaries to all others who had been employed by the railroad for at least a year and various other gifts for the remaining staff.
In July 1910, after the sale of the Texas Central Railroad, he did the same thing.
How many corporate leaders of today would do that?
Henry King McHarg was born in Albany, N.Y., in 1851. His great grandfather was Lt. Joshua King, the Revolutionary War “celebrity” and prominent Ridgefield businessman, and his great great grandfather was the Rev. Jonathan Ingersoll, the second minister of the First Congregational Church (both King and Ingersoll are profiled in Who Was Who).
McHarg attended a private school in Geneva, N.Y. At the age of 15, he joined the investment offices of LeGrand Lockwood, a Wall Street stockbroker. Lockwood’s interests included railroads, among them the Danbury and Norwalk Railroad, of which he was a major stockholder and eventually president. Lockwood’s interest in railroads may have inspired McHarg, who also became fascinated with that rapidly growing industry and wound up owning a at least four railroads around the country. (Lockwood, a Norwalk native who died in 1872, built and lived in what is now the Lockwood-Mathews Mansion, a historical museum in Norwalk.)
When Lockwood ran into some financial troubles in 1869 and had to downsize his office, McHarg joined the Third National Bank and worked his way up in the world of finance so that on the day after his 21st birthday, he became a member of the New York Stock Exchange (when he retired from the exchange in 1926, he was its oldest member). In 1873, he went into the bond and investment business in partnership with William Adams, under the name of Adams & McHarg. After 12 years, the two split and McHarg continued the business alone.
According to The Encyclopedia of Connecticut biography, published in 1917, “The railroad 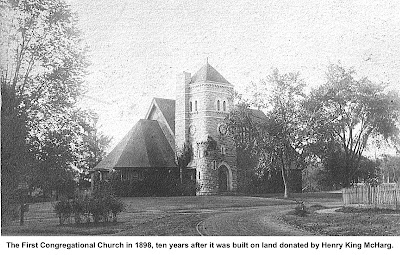 interests of Mr. McHarg have for a long period been numerous and important.” His specialty was taking over failing railroads and turning them into successful, profitable operations. Among them were the Texas Central (of which he was president for about 20 years),  the Atlanta, Knoxville & Northern, the Virginia & Southwestern, and Detroit & Mackinac. He was president of all those railroads but also served as a director of many others, including the Danbury and Norwalk Railroad, and the New York, New Haven, and Hartford (later the New Haven railroad), which took over the Danbury and Norwalk line.

“Mr. McHarg’s railroad work has invariably been constructive,” the encyclopedia said. “While the element of speculation, which is never wholly absent from any business undertaking, had its part in his ventures, more especially as they were all the rehabilitation of unsuccessful enterprises, he has contributed substantially to the advancement of the railroad interests of the last third of a century, having imparted to everything he undertook some portion of his vitalizing energy.”
It was through his railroading ventures that McHarg wound up naming a town. For many years he had a home in Stamford. According to Texas historian Tammy Hill Harvey, in April of 1891, a group of Texas Central Railroad bondholders that included Henry McHarg bought the railroad, which was in foreclosure.  McHarg made many trips to Texas to reorganize the Texas Central and in 1899, after a meeting with two men named Swenson who owned a large tract of land for a new town, he struck a deal in which the Swensons gave half their land to the Texas Central in exchange for making the town the new end of the line. A 40-mile track was laid from Albany, Texas, to the new town site, which McHarg named “Stamford” in honor of his own home town. On Jan. 8, 1900, Stamford, Texas was officially incorporated.” (Today, the city of some 3,100 people is best know as the home of the annual “Texas Cowboy Reunion.”)
McHarg was an avid yachtsman and in the 1890s owned the 65-foot cruising schooner, Neaera. He was a founder in 1895 of the Stamford Yacht Club (the club proudly points out that Commodore McHarg was responsible for naming Stamford, Texas, and that McHarg’s vice-commodore at the club was Schuyler Merritt, the Connecticut congressman for whom the Merritt Parkway was named).
Around 1925, after his wife Fredericka had died, McHarg decided to move to the town of his family’s roots, buying a house on Nod Road a little south of Whipstick Road. Two years later he married Elizabeth Clark Pierce; she was 36 and he, 76. The Nod Road home remained his main residence for the rest of his life.
McHarg was a philanthropist who usually went out of his way to keep his donations anonymous. “It is reported that they totaled $2 million, but rarely was public mention made of them,” The Times said in his obituary. But the newspaper did point out that one of his many New York City contributions was $5,000 ($70,000 today) to the “Home for Old Men and Aged Couples,” operated by the Episcopal church.
He showed considerable generosity in Stamford, where he had lived for more than 35, giving large amounts of money to organizations like Stamford Hospital, the YMCA,  and the
Ferguson Library.
His contributions in Ridgefield were kept quiet — except for one he made 37 years before he moved to town. McHarg donated to the First Congregational Church the land on which its landmark stone church was built in 1888.
Henry McHarg died in 1941 of a heart attack while wintering in Florida. His wife, Elizabeth, continued to live in Ridgefield until 1966 when she moved to Apache Junction, Ariz. She helped pioneer the organic gardening movement in the Ridgefield area in the 1930s, was active in the Red Cross during World War II, and after the war revitalized the Ridgefield chapter of Children’s Services of Connecticut (now Family and Children’s Aid). She died in 1976 at the age of 85.
What must have been one of the most trying periods for the McHarg family occurred in the 1930s when the aging Henry Sr., then 82, was sued by his son, Henry Jr., then 53, for failing to give him control of the Detroit & Mackinac Railroad as Senior had apparently promised. Junior had 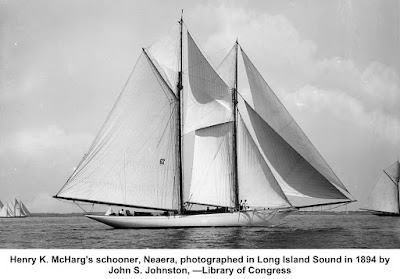 worked for years as the railroad’s vice president and general manager at a small salary that he accepted with the understanding the railroad would someday be his.

But after his mother died and his father remarried, dad decided he wanted to sell the railroad so he could give most of the proceeds to charity. The son would get $300,000 after dad died.
Henry Jr. did not like that, and sued his father for $1 million. The two became “enemies” for several years.
When the suit was finally settled, the story in The New York Times brought tears to the eyes of many readers.
New York State Supreme Court Justice Aaron J. Levy presided over the case in October of 1934. After several conferences, a settlement was reached in which Senior would make a new will, leaving a third of his estate — nearly $1 million — to Junior and Junior’s three children.
The lawyer for Junior tried to get the son to shake hands with his father and become friends again. Junior refused. The judge then told the younger McHarg: “Don’t you know this defendant is your father, whether he is right or wrong?”
“You don’t know the bitterness I have suffered over these years,” replied the son.
“I don’t want to hear about that,” said Justice Levy. “My suggestion in the light of this settlement, and even apart from it, is that you go and tender your hand to your father and ask him to forgive you.”
“The son then asked for time to consider the proposal,” the Times said, “but Judge Levy asked him to act at once. The younger McHarg then agreed, and walked up to his father at the counsel table, extending his hand. The father looked up, blinked in surprise and then took his son’s hand and embraced him. Both wept for some moments.
“After they sat together for a time, the son told the court, ‘I am glad Your Honor brought me to think of it. Now we will both be very happy and I know my children will be also.’
“‘I would give this boy my soul,’ said the father.”
The two left the court, arm in arm.


Junior died in 1943, only two years after his father.