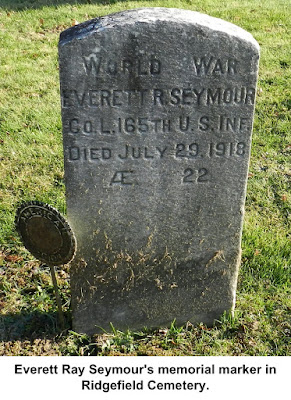 habits” and “a fine, manly fellow” who was “well-liked.”

He was also a brave: He was the first Ridgefield soldier to die in combat in World War I. As a result, his name lives on a century later, thanks to a venerable veterans organization.
Born in 1895, Seymour was a son of Rufus and Ada Seymour, who lived on Wilton Road West just south of Olmstead Lane. A descendant of founding families of Ridgefield, his father was a farmer and served as Ridgefield’s chief postmaster from 1903 to 1916. (Much of the Seymour family farmland became the Seymour Lane subdivision off South Olmstead Lane in the late 1950s.)
Everett was an apprentice carpenter working for local contractors when he became among the first Ridgefield men to be drafted into the war, enlisting in October 1917. Trained at Camp Devens and Camp Merritt, he was soon shipped to France with Co. L of the 165th Infantry from Connecticut.
In July 1918, Private Seymour and his company, then part of the 42nd Division, were involved in a battle near Fere-en-Tardenois, northeast of Paris and west of Reims. The troops were 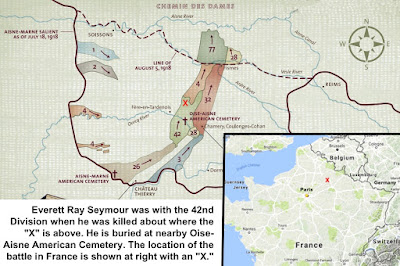 working their way up a hill on a farm. The Rev. Francis P. Duffy, chaplain of the 165th, explained what happened in a letter to the Rev. John M. Deyo of the First Congregational Church.

Seymour, he said, “died fighting gallantly in the most desperate charge made by men of this regiment in its long annals. His battalion crossed the Ourcq River, near Fere-en-Tardenois, in the early morning of Tuesday, July 29th and were, for hours, the only American troops opposed to the Germans.
“They fought their way up high all that long morning, cleaning up machine gun nests, and near the very summit young Seymour was brought down by a bullet that suddenly ended his brief but glorious career.”
He was 23 years old. (His memorial marker in Ridgefield Cemetery incorrectly says 22.)
Father Duffy was often in the thick of battle and became the most highly decorated cleric in U.S. Army history (Duffy Square at Times Square in Manhattan is named in his honor and actor Pat 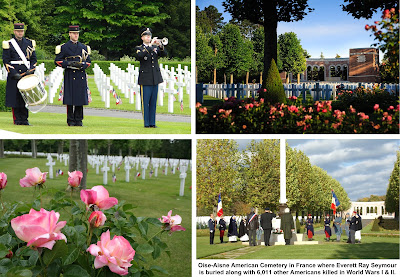 O’Brien portrayed him in the 1940 movie, “The Fighting 69th.”) Duffy told Deyo, “I buried him on the field where he fell, his fittest resting place; his grave is marked with a cross, and the place recorded.”

Today his grave can be found on Row 10 of Plot B at the Oise-Aisne American Cemetery, very near where he fell.
Seymour’s parents did not receive word of their son’s death until late September. Two months later, his father, Rufus, died at the age of 70.
In August 1920, a post of the American Legion was formed in Ridgefield. Because Seymour was the first to die in combat during the war, the new organization was named  the Everett Ray 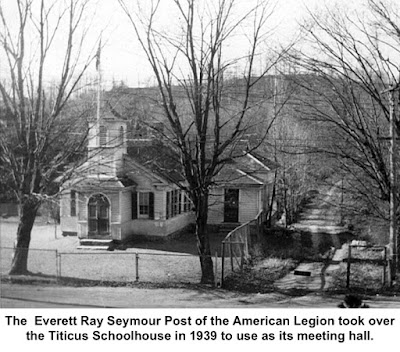 When the post’s American Legion Auxiliary was organized for women in 1924, one of the first to join was Gold Star Mother Ada Seymour.