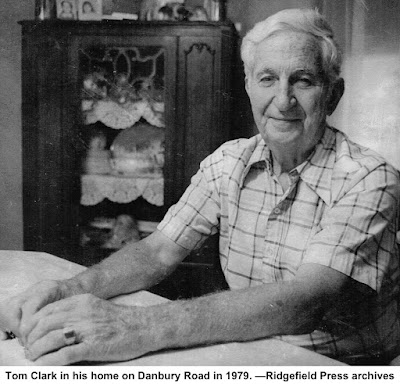 Tom Clark:
A Man Everyone Knew
There was a time when it might be said: If you don’t know Tom Clark, you’re not really a Ridgefielder. While Clark was hardly the most important man in town, he was or decades among the best known and most liked.
Clark’s life literally spanned the 20th Century. Born here in 1904, he was still active  when the 21st Century arrived.
The secret of his longevity? “I haven't had a glass of water in 60 years,” he told The Ridgefield Press in 1990. “I use lots of butter, eat meat with plenty of fat, and use plenty of salt and pepper.” Yes, he had smoked, too.
That all may not have pleased his doctor, but his good nature and his active life — including many years as a local athlete —  may have kept  Clark ticking and clicking more than his diet did. He was still driving a car and bowling at the alleys well into his 90s. And when he died in 2002, he was 97 years old.
The son of Irish immigrants, Thomas Walker Clark grew up on the family farm on Wilton Road West and, as a teenager, went to work at the Davey Brothers’ market in Stamford, part in an old food chain. He did so well that he was made manager when he was only 17 — until executives in New York learned his age and “then I had no job.”
He worked as a carpenter for a while, but in 1932 First National hired him to run its store here.  He managed the First National in Ridgefield until 1959 when the chain wanted to transfer him to manage its supermarket in Newtown.  Clark did not want to commute to work, retired from First National and went to work for the old Wayside Market on Danbury Road for 15 years. He also did work on two private estates until he was 85.
His wife, Ann Neil Hancock Clark, died in 1978, six weeks short of their 50th wedding anniversary.
In his younger days, Clark was active at baseball and basketball, but as a bowler,  he was almost legendary. At the age of 15,  he began bowling in the two alleys in the basement of the First 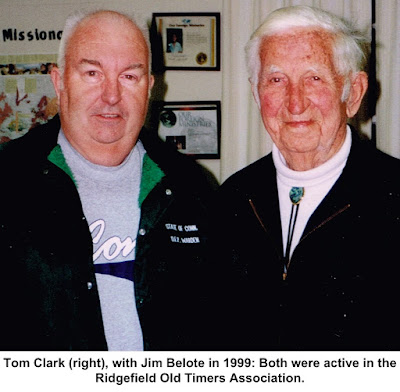 Congregational Church’s clubhouse, which stood on West Lane until it burned in 1978. Throughout his life he used the same ball, a two-hole, 16-pound model that was so worn, the manufacturer’s name eventually disappeared. “I think it’s a Brunswick,” he told an interviewer, “but I can’t be sure.”

He still bowled in his 90s, the oldest active bowler in the area at the time. He belonged to the Danbury and Ridgefield Bowling Leagues, and was inducted into the Bowling Hall of Fame.
As a youngster, Clark, nicknamed Eagle Eye, was a basketball star in the days when games were played in the town hall on Main Street. “If the whole team scored 30 points, it was a big night,” he recalled.
He later coached the American Legion’s basketball team. He was also a softball player, and a former coach of the American Legion softball team.
In his later years,  Clark was active in the Ridgefield Old Timers Association. The organization’s annual dinner in 2001 was dedicated to Clark, who had raised many thousands of dollars for ROTA scholarships. That year alone, when he was 96 years old, he collected more than $4,000 in donations.
“Tom Clark has been and continues to be the association’s major fund-raiser,” Old Timers Chairman Tom Belote said at the dinner. Added First Selectman Rudy Marconi, “he’s the Old Timers’ Energizer Bunny — he keeps on going and going, serving the association and Ridgefield High School scholarship recipients.”
Because his good health and eyesight allowed him to drive long after many contemporaries couldn’t,  Clark would often serve as a free taxi service for Ridgefield’s elderly — many of whom were a good deal younger than he was.


Tom Clark was also a longtime daily patron and “chairman of the board” at the Early Bird Café, where he enjoyed discussing the “old days” with fellow old-timers.