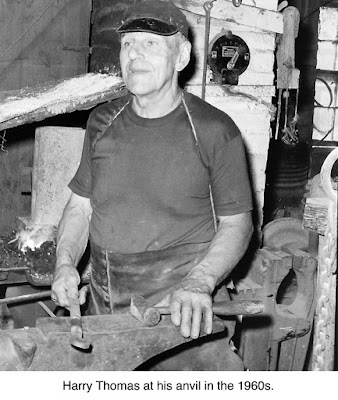 Harry Thomas:
The Village Smithy
Harry Thomas was a taste of the past in modern Ridgefield. As late as 1970, he could be seen at the forge behind his Catoonah Street house, fashioning things of iron. For Mr. Thomas was among the last of a profession that was once common and essential to any community: the blacksmith.
Harry Marvin Thomas was born here in 1884, a fifth generation descendant of Benjamin Stebbins, who built a house on Main Street in 1714 that became a hospital in the Battle of Ridgefield and stood where Casagmo is now.
At 16, he began his apprenticeship, and became probably the town’s leading blacksmith through the end of the age of the horse. In a pinch he could shoe and harness a horse in seven minutes.
Harry Thomas was a man of strength, not just in his arms, but legs – he thought nothing of walking to Norwalk or to Brewster and back, and did it often.
In 1927, he built the house still standing between the firehouse and post office, and his blacksmith shop out back, also still standing.
When the automobile took over from the horse, he went to work for Gilbert and Bennett in Georgetown, but on retirement, fired up the forge again for fun and for special projects that still required a blacksmith’s skill.
In a 1962 interview,  Thomas bemoaned the fact so many of his old friends had died. “They understood me, they knew what I meant,” he said. “People don’t understand each other now. They’re always fighting.”