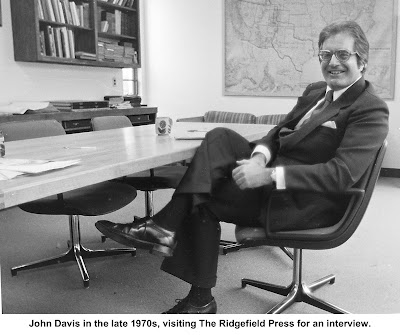 John H. Davis:
An Inside Look
For many years John H. Davis had intimate access to two of the most famed families of the mid-20th Century, but when he wrote about them, he wound up an outcast.
Davis was one of the 10 grandchildren of Mr. and Mrs. John Vernou Bouvier Jr. of East Hampton, N.Y. The other grandchildren included Jacqueline Lee Bouvier Kennedy Onassis, Princess Lee Radziwill, and Edith “Little Edie” Beale, the eccentric recluse featured in the movie “Grey Gardens.”
He spent much of his life writing and talking about the Bouviers and Kennedys, as well as about the mafia — which he believed ordered Kennedy’s death.
John Hagy Davis was born in Manhattan in 1929, a son of John E. and Maude Bouvier Davis who had their summer home on East Ridge from the 1930s until his father’s death in 1966. After that his mother summered on New Street (she is profiled in Who Was Who). Davis frequently spent time at both homes.
He graduated from Deerfield Academy in 1947 and from Princeton University in 1951. He  joined the U.S. Navy as an ensign, serving as a navigation officer with the U.S. Sixth Fleet in the Mediterranean.
After completing his naval service, he moved to Naples and studied at the Italian Institute for Historical Studies under a Fulbright scholarship. He remained in Italy for 13 years, first as founding director of the American Studies Center in Naples, then as director of Tufts University's Intercollegiate Center of Italian Studies. There, he wrote an illustrated history of Venice, which was published in five countries.
Davis flew from Italy to Washington to attend John F. Kennedy’s inauguration as president in 1961 and returned two years later to attend the president's funeral.
In the late 1960s, his mother heard reports that someone was writing a history of the Bouviers, which worried her. She told him to come and do a Bouvier book himself. “She said, ‘I’ve got the material for this book, and no one else is going to write it,’ ”   John’s sister, Maude Sergeant Davis, told an interviewer. “He just really needed to get his teeth into something. So he did it.”
The result was, “The Bouviers — Portrait of An American Family,” published by Farrar, Straus, and Giroux in 1969. The book was did well, selling 166,000 copies in hardcover alone.
“The Bouviers” was not well received by the Bouviers, however. For one thing, Davis debunked the long-promoted family story that they were descended from European royalty. In fact, he wrote, the Bouviers were descended from a foot soldier in Napoleon’s army who immigrated to America in 1817 and became a furniture maker.
His eccentric cousin Edie Bouvier Beale had some addled observations about that. “Oh yes, we’re all descended from 14th-century kings,” she told New York magazine in 1972. “Now a relative 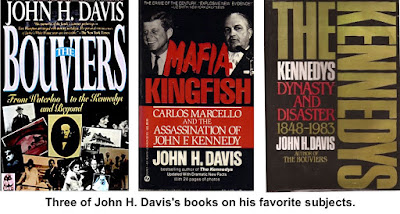 has written a book saying it’s all a lie. He’s a professor, John H. Davis, and he’s breaking with history. Everyone is. That’s how I know the millennium is coming. ‘The Bouviers: Portrait of An American Family.’ Not a bad book, really.”

But what most irked the family  — and Jackie Kennedy in particularly — was his description of Jacqueline’s father,  the heavy-drinking, womanizing John “Black Jack” Bouvier. Among other things Davis revealed that John Bouvier was so drunk at the Jackie’s wedding to John Kennedy that he couldn’t escort the bride down the aisle.
The final straw came in 1984 when Davis published “The Kennedys — Dynasty and Disaster” for McGraw-Hill, which became a New York Times bestseller and which, The Times said, “offered an unflattering view of family dynamics.” Among other things, the book provided many details about Senator Edward M. Kennedy’s Chappaquiddick accident and the drug overdose death of Senator Robert Kennedy’s son, David. That pretty much sealed the separation between the two cousins.
“After ’84, Jackie made it pretty clear she didn’t want my brother’s company,” John’s sister, Maude, told The Times. “It’s kind of too bad; they had a lot in common. My brother was a writer at heart, as was she. But she was about family myths, and John tried very hard to write truthfully.”
While in Venice Davis had become good friends with the art patroness Peggy Guggenheim, who owned a palace on the Grand Canal.
After completing “Venice,” he returned to New York to write The “Guggenheims — An American Epic” for William Morrow & Co. The book was named an American Library Association Notable Book  in 1978.
Davis subsequently turned his focus to the Mafia, producing “Mafia Kingfish — Carlos Marcello and the Assassination of John F.  Kennedy,” also published by McGraw-Hill. In it he maintained that Kennedy was assassinated by New Orleans mob kingpin Marcello, who he said ordered the hit after Attorney General Bobby Kennedy led a vendetta against him. For this book, he received a two-year research grant from the Guggenheim Foundation. L. Richardson Preyer, former chairman of the House Subcommittee on the Investigation of the Assassination of President John F. Kennedy, told  Davis: “I believe you have come closer than anyone else to a solution of the ‘Crime of the Century.’ ”
In 1993, he wrote “Mafia Dynasty — The Rise and Fall of the Gambino Crime Family” for Harper Collins. The book was soon followed by a Harper Paperback Original, “The Kennedy Contract — The Mafia Plot to Assassinate the President.”
In 1996, a year after his cousin died, he published “Jacqueline Bouvier — An Intimate Memoir” for John Wiley & Sons.
His last book, “The Twilight of the Godfathers,” a sequel to “Mafia Dynasty,” was due to be published by HarperCollins in 2003, but never came out.
Over the years Davis appeared frequently on television and radio programs, such as The Today Show and Larry King Live, discussing Kennedys and Bouviers, especially Jackie.
“He felt increasingly like an outsider, and that was hard on him," his sister said. He became a heavy drinker,  “He wanted to pattern himself after Black Jack,” Maude explained, adding Davis' depiction of Jackie’s father had been “very sympathetic to him.”
John Davis died in 2012 after suffering many years with Alzheimer’s disease. The New York Post described him as “penniless” at the time of his death.
The Post also reported in 2013 that financial adviser Sohodra Nathu, who had helped Davis with research on some of his books and who had cared for him at the end of his life, was in a legal battle with sister Maude over the rights to the author’s eight books. Nathu told a Manhattan court that she wanted “to honor his will” by fending off Maude’s attempt to take control of the estate; Maude maintained that her brother’s legacy “would be honored if my side of the family was in control. That’s what the books were about: my family.”


There was talk of a TV miniseries for at least one of the books, but that has not happened.