Thaddeus Crane:
The Spectacular Exit
If you were to go house hunting in Ridgefield during the first third of the 20th Century, chances were good that you would call on Thaddeus Crane. But he gained a fair bit of notoriety for 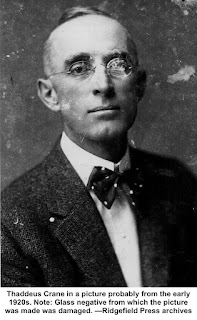 something quite different from selling homes and insurance: Mr. Crane may have had the most spectacular death of any Ridgefielder in the 20th Century.

In May 1928, for reasons unknown,  Crane drove at high speed onto a railroad crossing in Wilton where a northbound train, “whistle shrieking,” smashed into his Hudson sedan and hurled it into the air. The car exploded, crashed into the second locomotive, bounced through the air into the baggage car, and flipped off into a trackside signal box, which also exploded.
Witnesses risked their lives to drag him from the burning car, but Crane died within minutes.
Typical of fatal automobile accidents of the era, The Ridgefield Press devoted more than 20 column inches to details of the crash, but only two inches to his life.
Thaddeus Bailey Crane was born in 1862 in nearby Somers, N.Y., a great grandson of Colonel Thaddeus Crane of North Salem, who commanded the 4th regiment of the Westchester County Militia during the Revolution. (Col. Crane, then a major, was shot through the hip at the Battle of Ridgefield in 1777, survived and later became a representative to the New York State General Assembly and was a member of the New York State Constitutional Convention in 1788 that ratified the Constitution.)
After schooling at an academy in Norwalk, Crane became a farmer and, in 1891, married Mary Lent Brown. In 1896 the couple moved to Ridgefield where they had a farm off South Olmstead Lane, and raised two daughters and a son.
In 1909, a year after his wife died, Crane opened a real estate office, which was located  just north of where Planet Pizza (formerly Roma) is in the large Tudor-style building on Main Street. By 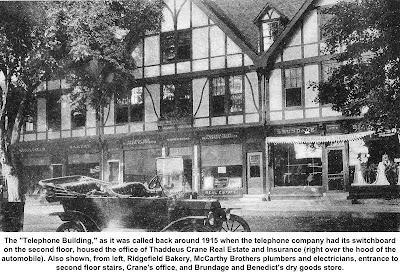 1920 he was one of only three real estate agents in a town that now has a hundred active Realtors; the other two were M. Estelle Benjamin and William R. Keeler.

Crane was well known in the community, serving on the school board in the 1900s and 1910s. He was a founding member of the Promoter’s Club, a predecessor of the Ridgefield Chamber of Commerce, and belonged to the Jerusalem Lodge of Masons. Active in St. Stephen’s Church, he was a member of the vestry when the parish built its new stone church in 1915.
How did Crane manage to enter a railroad crossing whose warning lights were flashing and where the train was both visible and loudly sounding its whistle?
There was a good deal of talk that Crane, in a hurry, decided to try to beat the train to the crossing. As Town Historian Dick Venus put it, “Thad one time ran a race with a locomotive in Wilton and came off second best.”
The Press provided plenty of analysis at the time. The crash occurred on what is now Route 33 near Route 7. A bridge now brings 33 over the tracks; back then, the road crossed the tracks.  “Mr. Crane was driving a Hudson super-six sedan,” the account said. “The machine was going across the railroad tracks at a fairly good clip when it was struck.

“The Wilton-Ridgefield road had been oiled recently and it had rained slightly before the accident happened. Whether Mr. Crane felt he could not bring the automobile to a stop in time to avoid the train and thus put on more speed in an effort to pass the crossing before the train will probably never be known. The danger signal was in working order and was still red after the accident.  The engineer blew the whistle of the train a considerable distance from the crossing and blew it continously when he saw the automobile.”
The train used electric engines; the Danbury line had been electrified three years earlier and 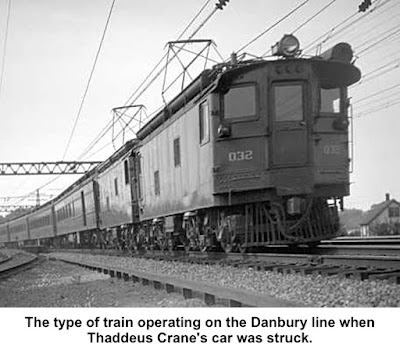 remained electrified until 1961. The engineer, Andy Dougherty, said that “he saw the crossing and apparently slackened speed. He blew the whistle for a second as an additional warning, although still thinking the car was about to stop. When he saw the automobile continuing, he threw on reverse. The train came to a halt some 200 yards north of the crossing.”

In the end, The Press concluded, “Why the accident happened cannot be understood by the authorities unless Mr. Crane, just before reaching the crossing, was unable to stop his automobile because of the wet road.”
Two years after his death, Mr. Crane’s business was sold to Arthur J. Carnall, and operated under the name, A.J. Carnall Inc. for decades.  In 1999, Ridgefield Bank, now Fairfield County Bank, bought A.J. Carnall Inc., and 10 years later renamed it Fairfield County Bank Insurance Services. It’s still headquartered in the “Carnall Building” at the corner of Main and Catoonah Streets.