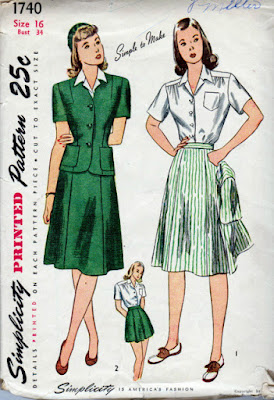 Joseph Shapiro:
Simplicity himself
It was simplicity itself, but the idea to help women make clothing came from a Russian immigrant with a background in chemistry.
When Joseph Shapiro came to the United States in 1912, his first jobs were as a laborer and a mechanic, though he had been trained in chemistry in his native Russia. Eventually he became an ad salesman for a women’s magazine that carried designs for making dresses and other articles of clothing at home.
In 1927, he decided that dress patterns were too expensive and too complicated, so he started producing his own and selling them at first for 10 cents — instead of 45 cents to $2 that was common at the time for magazines offering patterns.
He once told an interviewer that he had asked himself, “What is the tendency of the American people in everything: in architecture, in eating, in living?” The answer, he said, was: “Simplicity.”
“I was pretty sure cheap patterns would go,” he continued. “But I made one mistake. Ten cents was too cheap. No one would believe they could be any good at that price. So I raised it to 15 cents, and they began selling like hot cakes.” (15 cents back then was the equivalent of $2 today.)
By the time of Shapiro’s death in 1968, the Simplicity Pattern Company had an annual volume of $25- to $30 million, selling more than 120 million patterns a year. The company had some 4,000 employees and even owned a paper mill. He headed Simplicity from 1927 until 1949 and was chairman of the board till 1967.  On his desk he kept a sign that said, “Fools invent fashions—Wise men follow them.”
Mr. Shapiro came to Ridgefield in the late 1930s, buying the Eleven Levels estate that Jerry Tuccio later subdivided in a development of the same name.
His wife, Nora Shapiro, established the Ridgefield Toy Clinic, which refurbished donated used toys that were then given to needy families; it was based at the Community Center for many years. The couple contributed much money to museums, educational institutions, and charities.
The Shapiros sold Eleven Levels in 1952 to Paul and Elizabeth Arnold, who founded the large bakery still bearing their name.