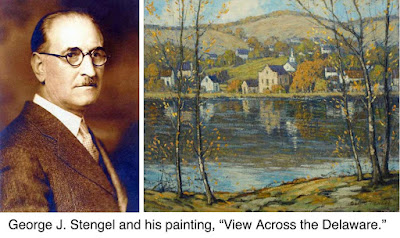 George J. Stengel:
Impressionist Artist
George J. Stengel was an artist who spent his last years in Ridgefield and who was instrumental in the founding of one of the region’s major museums.
A native of Newark, N.J., Mr. Stengel was born in 1866  but moved as a child to Yonkers, N.Y., where he lived until 1920 when he moved to Ridgefield. At 14, he went to work for a Yonkers carpet manufacturer, Alexander Smith and Sons, and soon developed an interested in art. He attended night classes for two years while working days. The head of Alexander Smith recognized his artistic ability, and sent him to the famous Julian Academy in Paris, where he studied for two years.
When he returned, he joined the carpet-maker’s design department, which he led for many years until his retirement in 1920. In his free time, Stengel painted, mostly country scenes in the impressionist style he had learned in Paris where, among his Julian classmates was Childe Hassam.
In Ridgefield he and his wife, Grace Varian, moved to lower Main Street in Ridgefield,  a house almost opposite Rockwell Road and known as the "Hoyt Place." Stengel remodeled the house and transformed the barn in the rear of the house into a large artist's studio.
He spent his retirement painting and was a frequent exhibitor at art galleries in the metropolitan area. He was widely known for his paintings of Mexico, which he and his wife had visited.
He was a member of the Salmagundi Club and the Guild of American Painters.
In 1916, he and noted sculptor Isidore Konti founded the Yonkers Art Association. Eight years later, the association petitioned Yonkers’ city council to turn the Glenview Mansion, overlooking the Palisades, into the Hudson River Museum. “The members of the Association were instrumental in convincing the city of Yonkers to use the beautiful Glenview Mansion as a museum,” said art historian Thomas C. Folk. “The newly organized Hudson River Museum opened its doors in December of 1924 with the ninth annual exhibition of the Association. Although the Yonkers Art Association no longer exists, the museum is thriving, and is an important part of Stengel's legacy.”
The museum is the largest in Westchester County.
Stengel died on November 31, 1937. “Stengel’s body of work is amazing for the quality and quantity he produced in about a twenty-year period toward the end of his life; achieving the dream of a career in the fine arts following a successful career in design,” Mr. Folk said.
Today his paintings can fetch tens of thousands of dollars at auction.