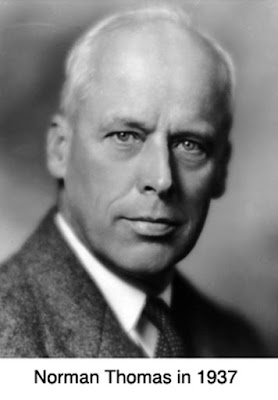 Norman Thomas:
Six-Time Candidate for President
A conservative, Republican town like Ridgefield hardly seemed the place where one of the 20th Century’s leading liberals would live. But Norman Thomas, six-time candidate for president of the United States on the Socialist ticket, had not one, but two summer homes here.
Thomas was born in 1884 in Ohio where as a boy he delivered newspapers for Warren G. Harding’s Marion Daily Star. Like his father and grandfather, he was a Princeton graduate (magna cum laude) who became a Presbyterian minister.
One of his first posts was in East Harlem, where he devoted himself to helping struggling immigrants, especially Italian-Americans.
“The neighborhood’s tenements were densely packed and could be tense,” wrote Louisa Thomas in “Conscience,” a biography of her grandfather. “Kids carried brass knuckles and the occasional pipe.” The latter was for beating, not smoking.
He and his wife, Violet, loved their work, but there were many differences between the poor immigrant residents of his parish and the Presbyterian minister and his wealthy wife, Louisa Thomas said. “One of them was that when the summer heat rose and released the street’s smells, when the Catholic church a block away held its annual festa and the carousing lasted all night, the Thomases could leave.”
And where they often headed was Ridgefield. In 1911, Violet bought a place on Limestone Road, which they called “Old Farm” and used weekends and summers.
“Norman would take the train out whenever his parish responsibilities and the countless organizations to which he belonged would allow,” Louisa said.  “There was a large garden and woods, and a lake nearby where Norman and the kids would canoe. They thought it was a refuge.”
By 1914, the Thomases moved to a house on West Mountain Road, but continued to own the Limestone farm until 1923, by which time they were no longer summering here.
Thomas was a pacifist, and opposed America’s entry into the first world war. After the United 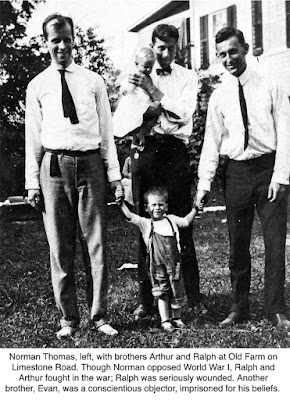 States did declare war, he became active in civil liberties work, focusing on helping conscientious objectors. Along with Clarence Darrow, he was one of the founders in 1917 of the National Civil Liberties Bureau, which became the American Civil Liberties Union (ACLU).

He also grew increasingly critical of the capitalist social order and joined the Socialist Party.  In a letter he included with his application, he said that he did not agree with all the Socialist Party’s platform and he feared any state that tried to master the minds and hearts of men, but that it was time for those who despaired of injustice to “stand up and be counted,” Louisa Thomas said.
He left the Presbyterian ministry to spend his life promoting the welfare of the poor and Socialist ideals. He ran for president in every election from 1928 to 1948, winning his greatest vote — 885,000 or 2.2% of the total — in 1932, the year Franklin Roosevelt was first elected. Some of his ideals were adopted by Roosevelt’s administration.
He initially opposed getting involved in World War II but supported participation after Pearl Harbor, though he believed that the conflict could have been avoided honorably. However, he opposed the internment of Japanese Americans and called the ACLU’s support of internment “dereliction of duty.”
He remained an activist all his life. He promoted birth control, opposed the Vietnam War, supported many labor causes, and backed the Civil Rights movement — Dr. Martin Luther King telegrammed him congratulations on his 80th birthday in 1964. Conservative leader William F. Buckley chose Thomas to be the first guest on his new television interview show, Firing Line, in 1966.
“Thomas had superb oratorical skills and passionate convictions,” The Ridgefield Press said in 1982. “They combined with a limitless energy to make him a strong spokesman for Socialist principles throughout his long life. During his few years in Ridgefield he soaked up his East Harlem experiences and distilled it into a coherent mission that he led until his death in 1968.”
One of Norman Thomas’s sons was Evan Welling Thomas 2d (1920-1999), who, as an editor  for HarperCollins and W. W. Norton & Company, published such best sellers as John F. Kennedy's “Profiles in Courage,”’ “Death of a President'' by William Manchester, and “The First Circle” by Aleksandr I. Solzhenitsyn. In 1967, Evan Thomas acquired the memoirs of Josef Stalin’s daughter, Svetlana Alliluyeva, who’d defected to the United States. Her payment, which generated a huge amount of publicity, was more than $1 million, then a record amount for a book.
Evan 2nd’s son, Evan Welling Thomas III, was a Newsweek editor and columnist, and author of nine books, including two New York Times bestsellers.