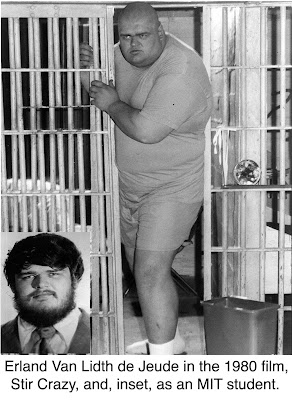 Erland Van Lidth de Jeude:
A Large Talent
Erland Van Lidth de Jeude was one of the most colorful, talented and fascinating people to grow up in town.
Born in the Netherlands in 1953, Van Lidth de Jeude became a giant of a man, standing six foot six and weighing at times more than 400 pounds. He lived here from 1962 to 1970 and while at Ridgefield High School was a champion shot-putter.
He turned down a football scholarship to Harvard and went to MIT where he took up Greco-Roman wrestling – “I found it more fun to throw people; they came back,” the shot-putter  joked in a 1978 Ridgefield Press interview.
By that year he was ranked third in his class in the world, based on his performance during the World Cup competition in Teheran, Iran (the year before the Islamic Revolution there).
He was to compete in the 1980 Olympics in Moscow, but  the U.S. boycotted the games.
While still an undergraduate at MIT, he was a teaching assistant, a rare honor. After college, he became a systems and computer analyst for Citibank, but also studied opera and sang with companies in three states (siblings, Philip, a tenor, and Philine, a soprano, are both classical  singers).
In 1978 Warner Brothers cast Van Lidth de Jeude as “Terror,” a member of  the Fordham Baldies street gang, in “The Wanderers.” Using the name Erland Van Lidth, he went on to play a prisoner in the 1980 film, “Stir Crazy,” with Richard Pryor and Gene Wilder. He appeared  a horror movie, “Alone in the Dark,” starring Jack Palance, that has become a sort of cult film.
Van Lidth de Jeude’s last film was “Running Man” with Arnold Schwarzenegger, completed shortly before his death from heart failure in 1987 when he was only 34 years old.