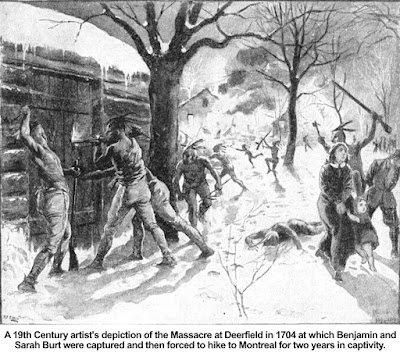 Benjamin and Sarah Burt:
Surviving Frontier Tragedy
All of the town’s first settlers lived lives of hardship that today would be difficult to imagine. One couple, however, endured incredible adversity before even setting foot in Ridgefield: Benjamin Burt and his pregnant wife Sarah were captured by French and  Indian fighters,  forced to hike hundreds of miles through mid-winter snow to Montreal, and were held captive for two years.
This, after Sarah Burt’s mother, stepmother and several siblings had been slaughtered in frontier attacks.
Yet the Burts survived and became leading citizens of Ridgefield, raising a sizable family and owning considerable property. Their descendants still live in the area three centuries later.
Benjamin Burt was born 1680 in Northampton, Mass., one of a dozen children of David and Mary Holton Burt. Northampton in the late 17th Century was on the western frontier — not unlike the Far West a century and a half later. There was a constant threat from hostile American Indians. It was a time when England and France were at war and the French, who had allied themselves with the Mohawks and other natives, were attacking New England settlers and settlements.
When he was 11, Burt got his first taste of the dangers of frontier life. David, an older brother,  was a soldier at a fort in Schenectady, N.Y., on Feb. 29, 1690, when it was destroyed by French and Indian fighters. David was taken prisoner and never heard from again.
As a young man Benjamin learned the smithing trade and in 1701 moved to nearby Deerfield, Mass., to work as a blacksmith. There, a year later he married Sarah Belden.
Sarah had already been through hell.
On Sept. 16, 1696, Mohawks and French descended on the Belden farm at Deerfield, killing Sarah’s mother, and three of her siblings, aged one, four and 16. Sister Abigail, 13, was wounded. The Indians captured her father, Daniel Belden, along with her 21-year-old brother and 13-year-old sister. Sarah, then 15, escaped by hiding in the barn.
Sarah’s captured father and his two children were marched 268 miles to a town outside Montreal, Quebec, where they were sold to Jesuits to work as servants at a seminary there. Although they were in effect slaves, Daniel Belden later reported that they were “favorably dealt with” by the Jesuits.
All three were eventually set free with the help of a “Dutch gentleman” after the French and English signed a treaty in 1698. They returned to Deerfield where they were reunited with Sarah and Abigail. Later that year, Daniel married Hepzibah Buell,  who also had a tragic end.
By 1704, the British and French were fighting again. On Feb. 29,  a band of 200 French soldiers and 142 Mohawks attacked Deerfield in what became known as the Deerfield Massacre. 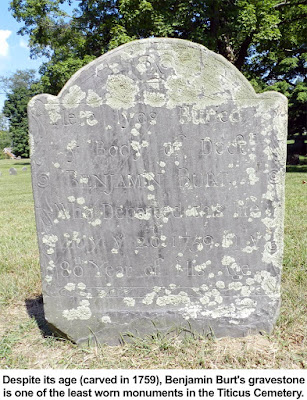 Nearly half the village was burned, 47 people were killed and 112 were taken captive and marched to Montreal. Among those killed was Sarah’s stepmother. 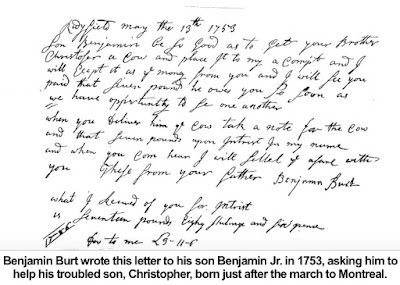 sample offers a glimpse of the problems experienced by the Burts’ son, Christopher, who had been born in captivity after his mother’s winter trek to Quebec.

In the 1753 letter, Benjamin asks his son, Benjamin Jr., to give Christopher a cow, adding that dad would pay for it when senior and junior next get together. Christopher had evidently had a life of considerable hardship, which Burt family historian Henry Martyn Burt  attributed to the traumatic birth in Canada. He “did not have a prosperous life,”  the author said. He “came into life under such distressing circumstances, ... which does not appear to have lessened in his declining years. The prenatal influences upon the child, which must have colored his whole life, no doubt had much to do in unsettling what otherwise might have been a prosperous and stable career.”