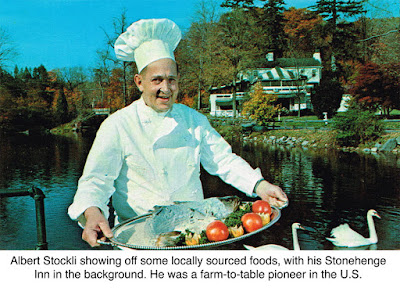 Albert Stockli:
A Pioneering Chef
Although he spent his final years operating a country inn in the small Connecticut town of Ridgefield, Albert Stockli was one of the most renowned chefs in America, the man who helped create some of the nation’s top restaurants a half century ago.
Probably the best of them — and once the best in the United States — was the Four Seasons (which  closed its doors in July 2016 after 57 years of serving fine food).
A native of Switzerland, Chef Stockli began cooking at the age of nine, studied in the capitals of Europe and came to this country in the 1940s.
He joined Restaurant Associates as their chef and, created the menu at the associates-owned Mermaid Tavern, the Forum of the Twelve Caesars, Trattoria, Charlie Brown’s, Zum Zum, and other famous New York City dining places. But it was the Four Seasons, which opened in 1959, that was the most famous and respected.
“The Four Seasons, probably the most important New York restaurant of the 20th century, Americanized fine dining and set in motion many of the trends that still dominate restaurant culture in the United States,” wrote William Grimes in the July 10, 2016 New York Times. “In its time, the Four Seasons was the most modern, the most daring, the most New York restaurant the city had ever seen.”
Grimes called Stockli “Restaurant Associate’s chameleon-like Swiss chef” who “emphasized fresh ingredients supplied by small producers around the United States, seasonal changes and a contemporary, international slant on flavor combinations.”
“Food historians,” Grimes said, “now see it as the starting point for a series of trends that came to define American dining: the cult of freshness and organically grown ingredients…; the inventive interpretation of regional American dishes, which became known as New American cooking; the international blending of styles and ingredients, later described as fusion.”
“In 1959, they were naming the places where the ingredients came from,”   Jeremiah Tower, the chef at Chez Panisse in the early 1970s, said of The Four Seasons. “They would write: ‘Handpicked tomatoes from Long Island, carved tableside.’ They were the first to pick up on farm-to-table.”
However, a liver ailment in 1965 prompted Chef Stockli to leave the city’s hectic life and his partners, Restaurant Associates, and to run Stonehenge in Ridgefield.
Already famous under founder Victor Gilbert,  Stockli’s Stonehenge gained a worldwide reputation for excellence, and many notables dined there, including scores of United Nations diplomats.
He was known for his inventive dishes that used fresh neighborhood foods – he visited farms and dairies himself, and had a network of hunters and fishermen who would bring him game. At a deer park near Millbrook, N.Y., he even maintained his own herd of Damhirsch, a variety of deer from his homeland that he used as a source of venison.
“Everything will be made fresh on the premises,” he told Craig Claiborne, then The Times’s food editor. “We will have game in the fall, the freshest of vegetables whenever they are available. There is a well‐stocked trout stream near the restaurant and customers may have trout whenever and however they like. We will make our pates and country sausage.”
In 1970, Stockli put together a book of his favorite recipes, which Knopf published as “Splendid Fare: The Albert Stockli Cookbook,” and which is still being sold today.
Stockli was only 54 years old when he died in 1972.