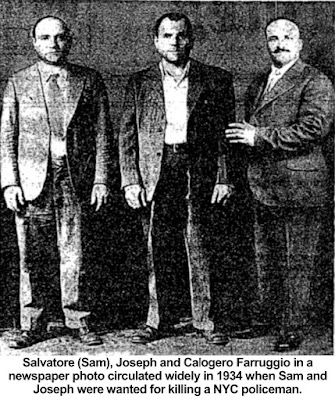 Sam and Joseph Farruggio:
The Murderous Brothers
The early 1930s was a wild time on the national scene. Prohibition had created crimes and criminals, murders were commonplace and the Depression was sparking social unrest.
Involved in all of these problems were three brothers—Sam, Joseph and Calogero Farruggio—who spent their childhood in Ridgefield.
In May 1934, two of the brothers made big news: “Desperate Man Hunt Centers in Ridgefield for Alleged Murderers of New York Cop,” screamed the front-page headline in the May 10 Ridgefield Press. In the New York Times, it was “2 Fanatics Named as Police Slayers.”
On their way to burn down a church, Sam and Joseph Farruggio had shot and killed a New York City policeman and a passerby, and seriously wounded another officer.
The shootings occurred on Friday, May 4, around 3 a.m., when the Farruggios were stopped by Patrolmen Lawrence Ward and William Brennan as the brothers were walking on East 101st Street in Harlem. One brother was carrying a two-gallon can of gasoline.
The two were on their way to “burn the first Roman Catholic Church they came to,” police said.
When the patrolmen tried to question the pair, they ran into a building at 322 East 101st Street where they lived with their other brother, Calogero, and “their aged mother.” Calogero was on the stoop, and Officer Brennan held him outside the building while Officer Ward chased the other two brothers.
A shot rang out. Ward was hit in the shoulder and fell backward down a staircase, breaking his back. He died shortly afterward.
Brennan released Calogero and chased Sam and Joseph up the stairs, over a rooftop, onto 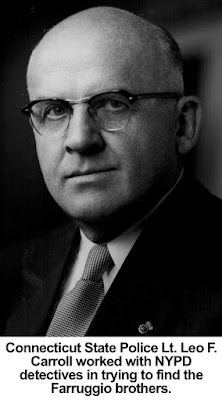 another building, down more stairs, out a door, and down a street. The Farruggios began shooting; one bullet hit and killed bystander Ernest Krahenbuehl, whom the brothers apparently mistook for a detective, and another shot felled Officer Brennan, who was seriously injured but survived.

Sam and Joseph escaped, prompting the manhunt in New York City and Fairfield County. Calogero was held in jail as a material witness.
Hundreds attended the funeral of Officer Ward, who had been married only three weeks earlier. The Times described his widow weeping as the coffin was carried into the church, and the police band played “Nearer My God to Thee.”
The Press story reported that two New York detectives were working with Lt. Leo F. Carroll, head of the state police in Ridgefield, in trying to track down the brothers. The two were “well known to Lt. Carroll” and were “said to be religious and social fanatics.” The Times quoted New York Police captain Edward Mullins of the homicide squad as saying they were “inflamed by Communist literature and atheist pamphlets.”
Captain Mullins said, “It was plain from Calogero’s story that the brothers were obsessed with the idea that they were haunted by ‘evil spirits’ and that the only way they could rid themselves of the spirits would be by setting fire to a church—any church.”
Police were checking out the pair’s former haunts in both Ridgefield and Bridgeport. They were aided by information provided by Calogero, whom detectives described as “dull-eyed and not overly bright.”
Some six months later, on January 18, 1935, two New York City transit policemen picked up “several suspicious-appearing individuals on the Astoria elevated line,” the Brooklyn Daily Eagle reported on January 20. They included the Farruggios, who were “carrying brown paper bags which, they said, contained bread....As they were led to a patrol wagon by Patrolman Thomas Connors, they ripped the bags open, and drew revolvers from them. Firing away, they fled down a Brooklyn street. Police returned the fire and the pair dropped. They were taken to St. Johns Hospital, where they died.”
The Eagle’s account was buried at the end of a long story that recounted six murders and shootings over the previous day or two in New York City.
The origin of the Farruggio brothers (also spelled Farruggia) is unclear. The Times said they were the only surviving offspring in a family that once numbered 24 children and that they came from “a remote corner” of Sicily. Citing Connecticut State Police, the Times said they had entered the country without passports.
However, in Ridgefield Town Hall are birth records that indicate the Farruggios were both born in Ridgefield—Salvatore “Sam” Farruggio in 1913 and his brother Giuseppe Liopoldo “Joseph” Farruggio three years later. They were listed as the sixth and seventh children of Calogero and Cyrenna Norata Farruggio, who, the records said, had come to this country from Parma, Italy. Calogero, the father, was listed on both birth certificates as a laborer.
Adding to the mystery is the fact that the birth records appear to have been supplied by the Connecticut State Police sometime after Sam and Joseph were killed. What’s more, the birth years appear to conflict with the ages published in the Times, which had said Sam was forty and Joseph forty-two.
State police described Joseph as a “transient factory worker who settled down in Ridgefield as a small-time merchant and bootlegger” who had operated “an alcohol cutting plant.” Salvatore, they said, “is a similar cut from the same cheese. He beat the war cloud out of Italy.”
The Times said that Joseph and Salvatore had been arrested in Ridgefield in 1931 on a charge of receiving stolen goods and were sentenced to one to three years in state prison. “Their Ridgefield job was bad,” Captain Mullins said. “It wasn’t professional. They’re not too sharp. It was the only crime on their record.”
After they moved to New York City, police said, the brothers eked out a living peddling hot dogs from a hand cart along Third Avenue. Calogero did most of the work, with Sam and Joseph helping out.
“They seldom made more than 35 or 50 cents a day,” the Times quoted police as saying. —from “Wicked Ridgefield,” The History Press, 2016.