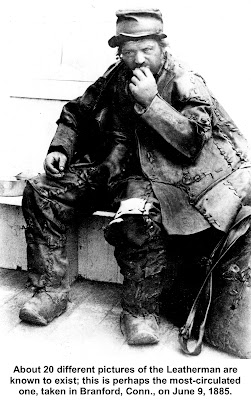 The Leatherman:
Mysterious Vagabond
Many an odd character has set foot in Ridgefield, but few could outdo the Leatherman, a 19th Century vagabond whose strange life has led to many local legends in Connecticut and New York. While countless people saw him, little is known about this man the New York Times once called “uncouth, repulsive and wholly inexplicable,” but who was liked and respected by many people along his long, circular route.
When the Leatherman would arrive in some villages, “it was like the circus coming to town,” said Dan W. DeLuca, author of “The Old Leather Man: Historical Accounts of a Connecticut and New York Legend” (Wesleyan University Press, 2008). “The teachers would dismiss school. All the children would go outside, stand by the fences, and watch him go by.”
“Everyone wanted to know about the Leatherman,” DeLuca added. “He was a mystery. He didn’t ask or want anything from anybody. People were fascinated by him.”
That he frequented Ridgefield seems certain, even though The Ridgefield Press said in 1884 that the Leatherman “as far as we know, has never included Ridgefield in his habitual route.” That conflicts with other evidence and a lot of oral tradition that says that, in fact, he regularly passed through town.
For instance, Gilbert Burr, who lived on Ridgebury Road and later became a Ridgefield state representative, wrote in his diary on Saturday, Jan 28, 1888: “Pleasant & very cold. S.A. & I went to Danbury. She got me a robe. Went to see Percy about sleigh, took 10 ½ dozen eggs. Eclipse of the moon this eve, saw it. Miss Hull called and Mr. & Mrs. Reynolds here. Jno Ord up & spent the evening. Leather Man along 12 M.”
It was as if he was an expected visitor.
Later in the year, on Tuesday, Oct. 16, he wrote: “Stormy with clear weather at night. Leather Man along. Giles Bates up in P.M. Around the barn, Thomas J.D. & I cutting wood.”
A few months after that entry, the Leatherman was dead.
Just who was this mysterious character who has inspired at least one book, a television documentary,  innumerable articles in newspapers and magazines, and even a song by Pearl Jam?
This much is known:
The Leatherman did not speak much. In a 1947 article in The Press, Paul Baker, then a reporter (later a radio journalist) wrote, “Unable to speak English, he would utter an unintelligible sounds and motion to his mouth.”
Other accounts say he was fluent in French and could speak broken English. When he died in 1889, he was found in the possession of a French prayer book, suggesting that he was born either in Quebec or France.
This French connection has given rise to one story that maintains he was born Jules Bourglay 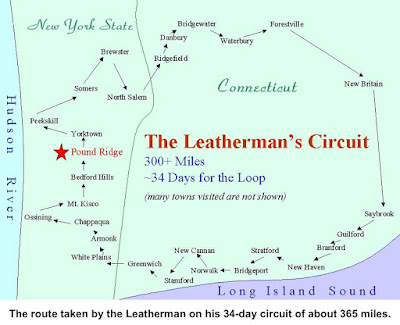 in Lyons, France, the son of a prominent leather tanner who went bust after some bad investments. The fact that Jules’s family was broke prompted his fiancee to cancel their impending wedding and she wound up marrying a rival suitor. Crushed in spirit, Bourglay fled to America as a stowaway on a ship.

That account of his early days was apparently invented by a Waterbury newspaper, reports author Dan DeLuca. The fact is, DeLuca said, no one knows who the Leatherman was, where he came from and why he did what he did.
Among the few facts known about the Leatherman was his cause of death: Cancer of the mouth, said to have been brought about by love of tobacco.  On Friday, January 25, 1889, The Danbury Evening News reported “The Leather Man was in Redding and called early in the morning at the residence of Dr. J. H. Benedict, where he asked for a breakfast.
“He was readily recognized by Mrs. Benedict from his leather clothing, and she invited him into the kitchen. As Mrs. Benedict can speak French, she soon learned his wants, which were simply coffee and she furnished him with all he desired. He drank the full of two large bowls, into each of which he put a teacupful of sugar.
“He explained that he was unable to partake of solid food on account of his cancer, which prevented chewing. He conversed for a short time with Mrs. Benedict in French, until she asked him of his antecedents and then he became suddenly and stubbornly silent and spoke in his broken English.
“His cancer is rapidly eating away his life. The right cheek is entirely gone, including a portion of the lower lip. He would not allow Dr. Benedict to dress it or Mrs. Benedict to do anything for his comfort, save to give him the coffee and a bottle of milk.
“He now seems very shaky and is evidently drawing near his end. It seems as if the Humane Society should look after him, and care of him, even if it was necessary to do so by force, or else some day he will be found a corpse in some out of the way place, the victim of a-craze, want, neglect and exposure.” (A-craze or acraze was a term for infirmity.)
He had, in fact, undergone brief treatment, but not willingly. The previous year, 1888, the Connecticut Humane Society had him arrested and placed in a Hartford hospital. But because he was diagnosed as “sane except for an emotional affliction,” had money and wanted to get out, he was released.
Where did he get his money? Paul Baker wrote in his 1947 story that after he had arrived in America, the Leatherman received a small  legacy from a relative. “He deposited the money in a bank in Port Chester, N.Y.,  and from time to time while on his travels, would go there to draw upon his account.” Like so much else about the Leatherman, this report could not be confirmed.
The Leatherman often followed railroad lines in his travels and it is known that he had visited the Branchville area, though not necessarily on his regular route. Redding historian Brent Colley says a cave north of the Branchville station was likely one of his stopping places. “The back end of the cave has a natural chimney, which is common in other Leatherman caves and is not easily found (another key feature),” he said.
After the Leatherman was found dead  in his cave on a farm in Briarcliff, Westchester County, in March 1889, a coroner’s inquest was held because he was such a famous character. According to one account, “The Leatherman’s bag was examined at this inquest and was found to 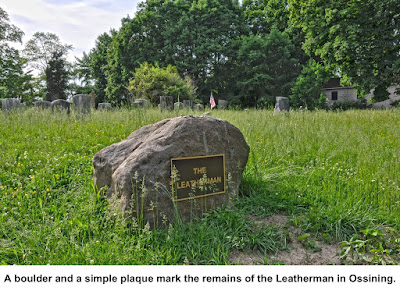 contain leather working equipment such as scissors and awls, wedges, and a small axe, an extra axe head, and other equipment that made the sack unusually heavy considering that the Leatherman carried this burden as he walked. Of much interest is the fact that the bag contained a small prayer book, which was in French. This piece of information combined with the French style footwear may allow us to conclude that the Leatherman may well have been a Frenchman.”

He was buried in Sparta Cemetery in Ossining. In 1953, a local historical society placed a headstone on the grave that incorrectly said he was Jules Bourglay of Lyons, France.
Because it was only a few feet from the busy U.S. Route 9 highway, the Leatherman’s grave was moved in 2011 to another spot in the same cemetery — this time with a marker that says only “The Leatherman.” The only remains found were a few nails, possibly from the coffin. The dirt and nails were placed in a new pine box for the reburial.
Much would surprise the Leatherman about the modern world and the fact that he is still remembered in a book, Connecticut Public Television documentary and countless articles. Perhaps he would be most surprised by a song recorded by Pearl Jam in 1998. Its lyrics include:
Here he comes. He’s a man of the land. He’s leatherman
Smile on his face. Axe in his pack.
He’s Leatherman. Leatherman. Leatherman.
Comes out of the caves once a day to be fed.
He wasn’t known to say much but “Thanks for the bread.”