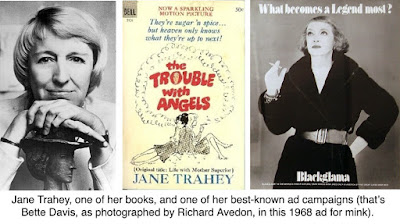 Jane Trahey:
Women and Power
Jane Trahey’s accomplishments read like those of a half dozen people put together, all talented.
She was a leading fashion copywriter, the first adwoman to earn more than a million dollars in a year, and among the first to establish her own New York City agency (with such clients as Calvin Klein, Bill Blass,  and Elizabeth Arden).
She wrote a half dozen books of humor, including “Pecked to Death by Goslings,” a novel about living in the small town of Old Gosling — i.e., Ridgefield. It described her conversion of a New Road barn into a home, a place she called Versailles, “not because it looks like it, but because it costs as much,” she said.
Her novel, “Life with Mother Superior,” retitled “The Trouble with Angels,”  was made into a Hollywood movie starring Rosalind Russell and directed by Ida Lupino.
Trahey was a playwright, the author of  “Ring Around the Bathtub,”  which was on Broadway.
She had also written screenplays, cookbook parodies, and regular columns for Advertising Age, The Chicago Tribune, and Working Women.
She was a leader in the National Organization for Women, wrote and lectured extensively about women and power, and was a founder of the First Women’s Bank of New York. She wrote an autobiographical self-help book called  “Jane Trahey on Women & Power: Who's Got It. How to Get It.”
And she won more than 200 awards for advertising, writing and public service.
Born in Chicago in 1923,  Trahey graduated from Mundelein College, a Catholic women’s school, in 1943. Her first job was at The Chicago Tribune in the records library, known as the morgue. “My mother never got over it,”  she once said. “Every time she would call and someone would answer ‘the morgue,’ she'd cross herself and hang up.”
Her real career began writing advertising copy for men’s underwear. One of her first ad jobs was at Neiman-Marcus in Dallas. She came to New York in 1956 and soon founded Jane Trahey  Associates, which operated for many years under several names..
“It was a very informal company, like a playground,” Rocky Piliero, Trahey’s production manager, told The New York Times. “Ms. Trahey didn’t like accounts. She liked projects. She liked to do something new. She’d be gung-ho for six months, then get bored.”
She had her country home on New Road from the 1950s until the early 1970s, when she moved to Kent. She shared her place here with fabric artist Tammis Keefe, who died in 1960, and with her companion for more than 40 years, pioneering TV producer Jacqueline Babbin.
Ms. Trahey died in April 2000 in Kent at the age of 76.