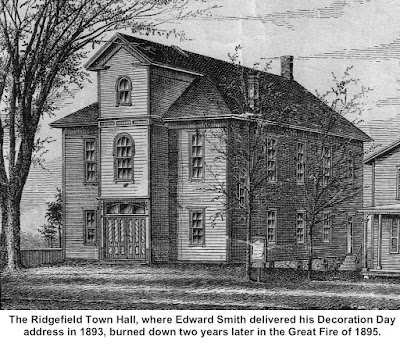 Edward H. Smith:
He Hated Slavery
Aside from being a well-known Ridgefield businessman of his era, Edward H. Smith had two unusual and noteworthy characteristics: He was an impassioned orator against slavery and he died on the same day as his wife.
Although a native of Westport, Edward H. Smith was a descendant of one of the founders of Ridgefield. He was born in 1827 and grew up in New York City and in Wilton. When he was 17, he went to Mobile, Ala., to be a clerk in the store of a clothing manufacturer who was a relative. He was there for five years, and witnessed slavery for the first time; he never forgot the scenes and the pain he saw.
In 1848, he returned to Wilton but moved to Ridgefield a year later to work as a clerk.
He soon started a general store on Main Street, something that was then called a “mercantile,” and owned the business for more than 40 years. He also became a partner with D. Smith Sholes in operating the Ridgefield Shirt factory.
During the Civil War, Smith served as a first lieutenant in the Connecticut National Guard — by then he was probably too old to be on the battlefields of the war. He was, however, a strong believer in the cause of the Union.
A member and president of the Ridgefield Debating Society, Smith was known for his oratory skills. He used those skills on May 30, 1893, Memorial Day — then called Decoration Day — to recall the horrors of slavery. In his oration, delivered in Town Hall, he seemed to criticize not only his country’s founding fathers but also its religious leaders. And he praised the attack of the South on Fort Sumter as a “messenger from God.”
Excerpts from his speech were included in an 1899 biographical history of Fairfield County.
“A little over a quarter of a century ago,” Smith told Ridgefielders,  “there were over three million men, women and children, slaves in this Christian land of ours; men who had no rights to the fruits of their labor and toil; men without a right, without a hope, sold at the auction block like so many articles of merchandise; wives separated from their husbands, children from their parents —   lovely girls, as fair in face and form as any within this hall today, bought and sold as young cattle in the streets.
“I speak of scenes and events which I have repeatedly witnessed in the streets of Mobile and New Orleans, and therefore speak feelingly.”
The founding fathers were a party to slavery, he said. “Our forefathers were partakers in this great wrong in the earlier days of the Republic, and only abandoned it when they found it unprofitable.”  He maintained that in the past, “from the press, yes, even the pulpit, argument and appeal ...  in defense of the doctrine of the right of the stronger to enslave the weaker, were listened to with pleasure and applauded as the words of wisdom falling from the lips of experience.”
He recalled that some of the nation’s leaders considered it “the loftiest act of patriotism to intercept and return, under that flag, the poor fugitive in his midnight flight to liberty or death.”
He bemoaned the fact that “a great nation, boasting of its religion and independence, had become so debauched by its professional politicians that it seemed almost ready to adopt the sentiment which might be inferred from the decisions of the highest tribunals of the land.  Witness the decision of the Supreme Court of the United States in the Dred Scott case — ‘the black man had no rights which the white man was bound to respect.’”
The outbreak of the Civil War was heaven-sent, Smith suggested. “I wonder at God’s goodness to us as a nation, and feel that we ought reverently to thank God for that first shot fired at Sumter’s battlements — for it was the forerunner of a doomed system, announcing a day of deliverance; the breaking of the bonds; the opening of the prison doors that the captives might go free; that no more should be witnessed the scarred and bleeding backs of its victims, no more the sobs of the mother, the wail of anguish from the bruised heart of the father, as they saw their little ones torn from their embrace and home.”
“Reverently I can but feel that that shot was a messenger from God, proclaiming that no more should the soil of his chosen land be pressed by the foot of a slave, but by men, free men, no more to be called chattels, articles of merchandise... What a triumph for humanity! What a victory for justice!”
Edward Smith was active in the civic and social life of Ridgefield. He served as a state representative in 1859 as a Republican and in 1873 as what was called a “Liberal Republican.” He was a member of the Board of Selectmen, president of the Ridgefield Agricultural Society, and head of the Ridgefield Improvement Society. He was active in the Masons and St. Stephen’s Church where he was a warden and the parish treasurer.
But it was in his departure from this world that he gained his final distinction.  In February and March of 1905, an outbreak of “La Grippe” — as the flu was called — occurred in Ridgefield and at least five people died from it. Both Edward and his wife, Delia Gregory Smith, came down with La Grippe and both developed pneumonia because of it. They died on Feb. 24, 1905. He was 77 and she, 76. They had been married for 56 years.