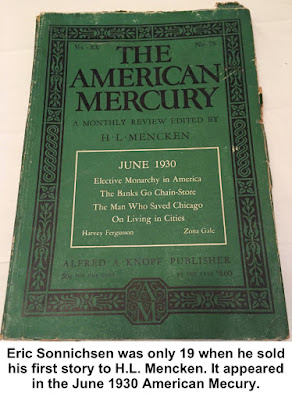 Eric Sonnichsen:
Seaman and Wordsmith
Seaman, writer, boxer, and show dog breeder: Eric Sonnichsen was no ordinary Ridgefielder.
The New York City native, whose mother was a Russian countess and a journalist for The International Herald Tribune, ran away from home at the age of 16 (his father had done the same thing at 12).
He sailed on freighters around the world, crossed the country on freight trains, and boxed professionally on three continents, including in Golden Gloves competition. He worked in the lumber mills of the Pacific Northwest and was a gandy dancer for railroads, laying and repairing tracks.
But he was also writing, and H.L. Mencken, then editor of The American Mercury, accepted his first story when Mr. Sonnichsen was 19 years old. He also sold work to Story magazine.
While he continued to write most of his life, he stopped trying to sell his work after he went back to sea. “He was bad at marketing,” said his daughter, actress Ingrid Sonnichsen.
He spent more than 45 years as a merchant seaman, including service aboard Liberty ships plying the North Atlantic during World War II. Twice his vessels were torpedoed by German submarines. He retired in 1973 as a first mate.
He and his wife, Muriel Gallick, a Broadway actress whom he married at the Stage Door Canteen, came to Ridgefield in 1965 and operated Meriking Kennels, breeding and showing German shepherds.
Mrs. Sonnichsen, who most of her life was afraid of dogs, became so enchanted with them that she wound up an American Kennel Club official recognized to judge 26 breeds. She died a year and a day before her husband. He died Dec. 31, 1999, the day before “the new millennium,” at the age of 90.