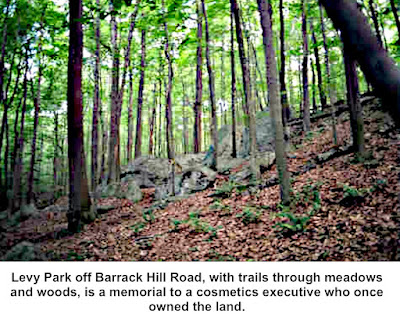 Benjamin Levy:
Good Scents
Ridgefielders  who’ve seen or visited Levy Park along the east side of Barrack Hill Road may have wondered just who “Levy” was. The 48-acre refuge recalls a man of not only good sense, but good scents.
Born around 1879 in Rheims, France., Benjamin E. Levy joined Coty, the French cosmetic company, in 1910, and a couple years later, established the American branch of Coty.  In 1934, while founder François Coty was still president, Levy was elected chairman of the board of directors.  He later took over as company president, resigning in 1940.
During his leadership Coty had one of the major pavilions at the 1939 New York World’s Fair, visited by well over a million people.  Coty’s perfume products were shown in the Hall of Perfumes and displays demonstrated the role of decorative arts in cosmetic packaging.
Levy also led another major cosmetic producer, Charles of the Ritz. That company was founded by a Frenchman, Charles Jundt, who in 1919, took over the beauty salon at the Ritz Carlton Hotel in New York, fashioning it after one he had run in Paris. A few years later, he began selling a line of cosmetics to retail outlets. In 1936, Jundt sold his interest to Benjamin Levy and Levy’s nephew, Richard B. Salomon. Salomon ran the company until it was sold to Squibb in 1971. Levy served as chairman of the board.
Levy and his wife, Regine, moved to Ridgefield in 1940, acquiring 80 acres along Barrack Hill Road. Over the years he served as a member of the board of managers of the Ridgefield Boys Club and was on the Board of Incorporators of the Ridgefield Library. The Levys were also “quiet philanthropists,” whose good deeds were largely unpublicized. Among their donations was Renoir’s painting, Woman with A Cat, which they gave the National Gallery of Art in 1950.
Levy died in 1952 at the age of 73; his wife had died five months earlier.  Nephew Richard Salomon inherited the 80-acre estate, selling off the house and surrounding land to another Frenchman,  Jean LeGrand and his wife, Nina; Jean was a Schlumberger-Doll executive. (A few years later the LeGrandes sold much of the land to Peter Lorenzini and Norman Craig who developed Grand View Drive — a perfect pun reflecting the location and the former owner.)
Some 38 acres were left and in 1968, Salomon decided to give the land to the town of Ridgefield as open space, to be officially known as “The B. E. and Regine Levy Park and Recreational Area and Wildlife Refuge.” Since then, another 10 acres have been added to the park, which today has many trails through meadowland, woods, and wetlands.
Salomon had a long history as a philanthropist. He was a major benefactor of the New York Public Library, where he was chairman of the Board of Trustees. He was also on the boards of Brown University,  Lincoln Center, WNET Channel 13, and Stamford Hospital. He had lived in Stamford and died there in 1994 at the age of 82.