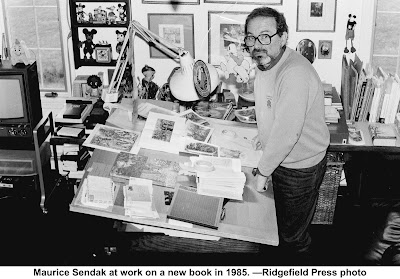 Maurice Sendak:
The Wild Things
When he moved to Ridgefield in 1972, Maurice Sendak had lived in New York City all his life, and had never needed a car.
“I’m a 44-year-old neurotic who just learned to drive,” he told a Ridgefield Press reporter sent to interview him that year. “Maybe you should warn them that I drive a green Plymouth.”
Six years later, as another reporter arrived to interview him, he asked apprehensively: “You’re not going to take pictures, are you? That means I’m going to have to shave. The guy who writes the kiddie books can’t have his picture taken if he doesn’t shave first.”
They were examples of the dry sense of humor of a man whose visions of fanged but eventually friendly monsters sparked a revolution in children’s literature.
For more than 60 years — 40 of them in Ridgefield, Maurice Sendak wrote and illustrated books that have entertained children and adults alike, and challenged established ideas about what children’s books should be. The New York Times once said  Sendak’s work “has brought a new dimension to the American children's book and helped change how people visualize childhood.”
His more than 80 titles had sold over seven million copies worldwide in a dozen languages 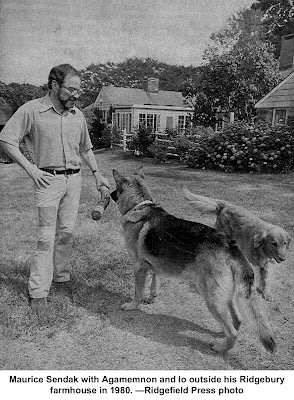 by the year 2000. They included such classics as “In the Night Kitchen,” “Outside Over There,” and his most famous work, “Where the Wild Things Are.”

Maurice Bernard Sendak was born in Brooklyn, N.Y., in 1928 to Eastern European immigrants. He spent much of his childhood in bed, suffering from a variety of illnesses.
The family didn’t have much money and he didn’t have many friends besides his brother and sister. “He was an outsider at birth, as Christians nearby would remind him, throwing dirt and rocks at him as he left Hebrew school,” the Associated Press reported.
A gifted storyteller, his father entertained the children with often disturbing tales of the old country that frequently ended unhappily.
“These were the stories he told us before we went to bed,”  Sendak said. “No wonder I’m an insomniac. I didn’t know these stories were considered intensely inappropriate for children until I repeated them in school and was sent home to have my mouth washed out.
“Up until my generation, there was a soft innocence, a sweetness in books for children, which I thought was inappropriate. It had nothing to do with my childhood or other people’s as I saw it.”
Sendak’s experience growing up as a poor Jew in Brooklyn during the Holocaust profoundly influenced his life and work. The monsters in “Where the Wild Things Are” were inspired by relatives who’d fled the Nazis and come to live with his family in New York.
“They are my uncles and aunts, who poked us, pinched us, said absurd, patronizing things to us, took up all the room, ate up all the food,” he said.
As a boy Sendak read extensively, drew comic strips, and illustrated his older brother’s stories. He didn’t go to college and worked at a variety of odd jobs until he was hired in 1948 by the famous toy store, FAO Schwarz, as a window dresser.
He studied at the Art Students League and was only 19 when he illustrated his first book, “Atomics for the Millions,” in 1947 (he did the book for his physics teacher in exchange for a passing grade and a small fee). However, later in life, Sendak confessed, “I was a very late bloomer as an artist. My students, at age 21, are much better technically than I was at their age.” 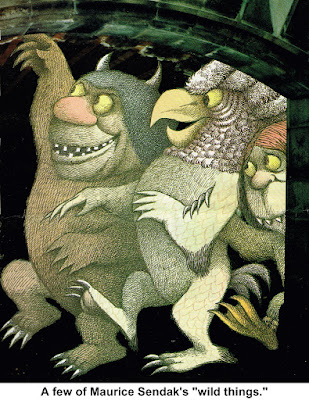 His break came in 1951 when he was commissioned to do the art for “Wonderful Farm” by Marcel Ayme. By 1957 he was writing his own books.
His many awards include the 1964 Caldecott Medal for the most notable picture book of the year. In 1970, he became the only 20th Century American to receive the Hans Christian Andersen Award in recognition of his entire body of work. In 1997, President Clinton awarded him a National Medal of the Arts in recognition of his contribution to the arts in America.
In 2009 President Obama read “Where the Wild Things Are” for the White House Easter Egg Roll. Yet, when it first appeared in 1963, “Wild Things” was greeted with as much controversy as acclaim. Many parents, teachers and librarians considered the story and artwork too scary for children. Some even thought the book could be psychologically damaging because young Max’s mother deserts him and he’s sent to bed to confront his nightmares alone.
But many child psychologists said the book helped express hidden childhood fears.
The traditional Dick and Jane were no match for Sendak’s naughty Max, an AP writer said. “His kids misbehaved and didn’t regret it, and in their dreams and nightmares fled to the most unimaginable places.” Monstrous creatures were devised from his studio, but none more frightening than the grownups in his stories.
“From their earliest years, children live on familiar terms with disrupting emotions — fear and anxiety are an intrinsic part of their everyday lives, they continually cope with frustrations as best they can,”  Sendak said when he received the Caldecott Medal in 1964. “And it is through fantasy that children achieve catharsis. It is the best means they have for taming wild things.”
In 1978, his curmudgeonly side came out a bit as he told Burt Kearns of The Ridgefield Press: “I love as few children as I do adults. I don’t feel that I write for kids. I happen to write books that are seen as being meant for kids because I create talking animals and things like that. But my books are not children’s books any more than any other book is. I just can’t write in any other vein.”
He described his simple style as “a poetic book form. That’s the only form I’m interested in. There is a beauty in the short text poem. I try to keep it potent, short, and full of energy. The reason that children understand it is because they have no fear of symbolic language — they can grasp things. They never feel lost in something unless it’s meaningless, and then they just throw it off into a corner. Adults are afraid to do that because they have too many self doubts in enjoyment when they should be going by instinct.”
“There is a magic in childhood,” he said, “but I like to think that there is the possibility of something magical in every human being. We just allow it more in childhood.”
He added that he didn’t take a condescending approach to children, nor did he attempt to moralize. “Who am I to teach or preach?” he asked. “I aid and assist.”
He bought his 18th Century house on Chestnut Hill Road in an out-of-the-way part of Ridgebury because “I wanted the experience of working in a different place,” he said six years later. 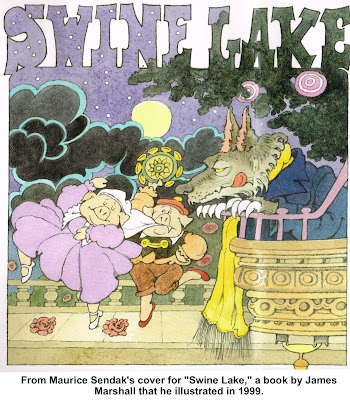 “My first experience of really being in the country was when I spent a wonderful summer  in Wales. That was very fruitful for me. When I was in my twenties, most of my vacations were spent in Cornwall. They were the best summers of my life. So when I was looking for a place to live, my first indication was to look around here. But I was really attracted to the house, and the house was attached to Ridgefield.”
He said “I don’t think that living in Ridgefield has actually influenced my art, but I guess that as I get older, my work will become more pastoral.”
Over the years his work expanded into the worlds of opera and ballet; he’s designed sets and costumes for several successful productions, including an opera of “Where the Wild Things Are,” which was also made into a movie.
He believed his art had always been deeply connected to the music he enjoyed.
“Designing for operas is as close as I can get to pretending that I’m a musician,” he said at the time.
Sendak was a mentor to many.  Jamison Odone, a former Ridgefielder, was among the illustrators who felt his mentoring, inspirational influence.
“I don’t think there are many people made like him anymore,” said Odone, who is now a university professor as well as a children’s book author and illustrator. “There were so many times he’d say to me, ‘I don't even know what I’m teaching you, if anything at all.’ But he didn’t have to be teaching. Just talking to him, and looking at his work — he moved so many.”
Lynn Caponera, his longtime assistant, helper and friend, said years with  Sendak shaped her way of looking at the world. “Maurice has a way of mentoring people,” she said. “You couldn’t do anything without seeing an artistic side to it, with Maurice. He made sure you felt good about everything you did. If you were painting a wall or weeding — anything you were doing, whether you’d think it was a mundane task — he had a way of making you see it wasn’t mundane.”
Sendak established a program for children’s book authors and illustrators, published or unpublished, in which selected artists would live next door to his house and he would mentor their work.
“It’s a very low key, loose relationship,” Caponera said in 2012. “That was really Maurice’s legacy of the last few years. He wanted to foster children’s book authors to keep doing what they do.”
In his final years, Sendak would often say he didn’t mind being old because the young were under so much pressure. He would speak about death and missing his late siblings and his longtime partner, Dr. Eugene Glynn, a children’s psychiatrist who died in 2009.
When he was 50 years old, Sendak told interviewer Kearns that he never planned to retire from writing and illustrating. “I’ll stop when I die,” he said. “But who knows? Maybe when I’m 65, the publishing world will decide to retire me and give me a Mickey Mouse watch. I’d like that, but I already have one.”
A few months before he died, he said, “I want to be alone and work until the day my head hits the drawing table and I’m dead — kaput.”
Death, he said, meant “everything is over. Everything that I called living is over ... I don’t believe in heaven or hell or any of those things. I feel very much like I want to be with my brother and sister again. They’re nowhere. I know they’re nowhere and they don’t exist, but if nowhere means that’s where they are, that’s where I want to be.”
Sendak, who had been in poor health for several years, died of a stroke in 2012. He was 83 and had never stopped working.
After his death the Maurice Sendak Foundation, which handles his estate, announced plans for a Sendak museum somewhere in Ridgefield. In 2015, there was talk of locating the museum in a former Schlumberger Research Center building on Sunset Lane that had been designed by the noted architect Philip Johnson.
However, in January 2016, the foundation decided not to use the Johnson building and said it 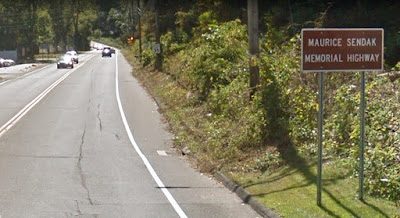 would look elsewhere. In July it got zoning approval for an art storage building on Sendak’s 17-acre homesite. It allows the foundation to host up to six visitors once a week to do research. The building, holding Sendak’s drawings and artwork, was to be attached to the existing house.

A month later, a stretch of Route 35, Danbury Road, from Limestone Road north to Route 7, was officially designated the Maurice Sendak Memorial Highway. The designation was the result of efforts started by Jake Madeson when he was a sophomore at Ridgefield High School and fostered by State Rep. John Frey.
“I wanted something that told every traveler who passes through town how much he meant to our town,”  said Madeson, a Sendak fan since he was a small child reading “Where the Wild Things Are.”
“That book was everything to me growing up,” he said.