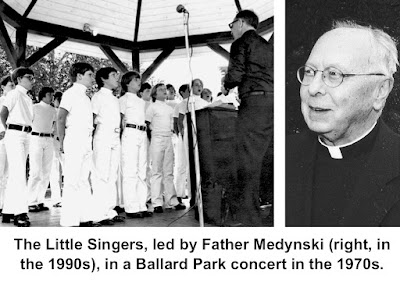 Fr. Francis Medynski,
A Pioneer Pastor
Father Francis Medynski seemed to have built St. Elizabeth Seton literally from the ground up. In the early days of the new parish, he did almost everything himself — painting, mowing the lawn, planting  the grass and trees.
When the church building was erected, he hand-made the wooden stations of the cross.
Though a bit of a carpenter and handyman, Father Medynski was first a priest and second a musician. These two vocations combined when he went looking for a baptismal font for the new church: He used the kettle of a kettle drum.
A native of New Jersey, Father Medynski was born in 1921, the son of Eastern European immigrants. His parents died in a flu epidemic when he was a baby and he grew up in an orphanage. He graduated from Catholic University of America, got a master's degree in education from the University of Detroit, and also studied music for many years. His specialty was choral music.
Over his career as a parish priest, he started 11 boys choirs. “Every time the bishop moved me to another parish, I started up another choir,” he told an interviewer.
In 1973, when he came to St. Mary’s as pastor, he founded The Little Singers, a choir that less than  two years later sang at the Vatican. Singer Francesco Morales had lunch with Pope Paul VI and personally delivered a message from The Little Singers.
“Ridgefield was little bit different back then. It was less affluent,” said State Rep. John Frey, 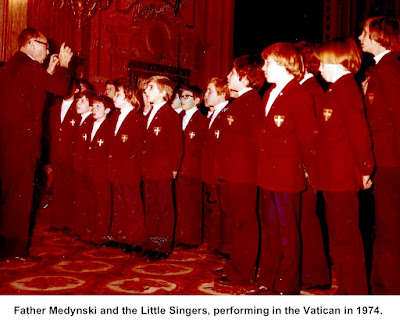 one of the Little Singers. “In order to raise money for our trips, we'd be out there with our red blazers and red-painted coffee cans, collecting change in front of the Grand Union.”

In June 1976, the choir flew to London to sing at Westminster Cathedral and Royal Albert Hall. It was to be their last major appearance, however; that summer, Father Medynski was given the huge task of creating a new parish in Ridgefield, and had to suspend his work with the choir.
“I would like to think that we are putting them to sleep for a while,” Father Medynski told The Ridgefield Press at the time. “It is not easy for me or the boys. They had dedicated themselves to good music, and not just sacred music, but secular music.”
In 1976, as the town's population grew, Bishop Walter Curtis had asked Father Medynski to start the new parish honoring St. Elizabeth Seton, the first U.S. native to be canonized.
The parish was created later that year, with first masses in Ridgebury School. The church opened in December 1978, and Father Medynski continued as leader of the flock until 1996 when he reached 75, the church's mandatory retirement age.
"It's been a fantastic, marvelous experience and tremendous to be with the best people in the world for 20 years," he told The Press at his retirement.
Father Medynski continued his priestly work, serving in temporary assignments in many parishes in the diocese. He died in 2008 at the age of 86.
“He was an incredibly smart, most of the time very patient, very humble man,” Frey said. “Looking back, I didn't realize it then, he was a man who was born into unfortunate circumstances, with his parents dying young, who was of strong character, and was just a humble and good man and was a good role model for hundreds of young boys, not just me.”