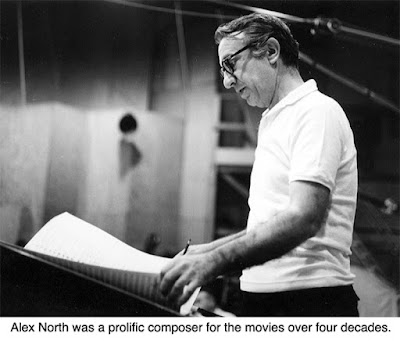 Alex North:
Music for the Movies
Music for many of the top movies of the 20th Century was composed by Alex North, a man who also mentored many composers — including John Williams.
“You’d make a hell of a composer,” North often told a young Williams.
North, who had a home on Great Hill Road for a dozen years, earned Oscar nominations for 14 of his films and in 1986 was the first composer to receive a Lifetime Achievement Academy Award for his body of work.
Born in 1910 in Chester, Pa., North studied piano at the Curtis Institute of Music, Juilliard, and the Moscow Conservancy. He also studied with Aaron Copland.
North wrote ballet and classical music in the 30s and 40s – Benny Goodman performed his Revue for Clarinet and Orchestra.
During World War II, he spent several years in the U.S. Army, service that included being the officer in charge of entertainment for recuperating soldiers in hospitals throughout the U.S. He also wrote music for two dozen government documentaries related to the war.
His first movie score, for Elia Kazan’s “A Streetcar Named Desire,” in 1951 won him an Academy Award nomination, and he was eventually nominated 13 more times.
He wrote the music for dozens of leading films, including “Death of A Salesman” (1951), “Viva Zapata!” (1952), “The Rose Tattoo” (1955), “The Rainmaker” (1956), “Stage Struck” (1958), “The Sound and the Fury” (1959), “Spartacus” (1960), “Cleopatra” (1963), “Cheyenne Autumn” (1964), The Agony and the Ecstasy (1965), Who’s Afraid of Virginia Woolf (1968), 2001: A Space Odyssey, “The Shoes of the Fisherman” (1969), “Willard” (1971), “Dragonslayer” (1981), “Prizzi’s Honor” (1985), “Good Morning, Vietnam” (1987), and “The Last Butterfly” (1990).
As a young musician, John Williams played piano in North’s orchestras.  “For those of us coming of age in the 1950s, and seriously interested in film music, Alex North was an inspiration, a role model and a hero,” Williams wrote the foreword to Sanya Henderson’s 2003 biography, “Alex North, Film Composer.” “He was then and remains so today.”
North also wrote much music for TV and won an Emmy for the score to “Rich Man, Poor Man” in 1976. In 1949 he wrote the music for Broadway’s “Death of A Salesman.” He won a Golden Globe for his score for “The Shoes of the Fisherman.”
North's song, "Unchained Melody," from the film “Unchained,” became a pop music classic. More than 1,500 different recordings of  “Unchained Melody” have been made by more than 670 artists. In 1955, when it first appeared, three versions of the song (by Les Baxter, Al Hibbler, and Roy Hamilton) made the Billboard Top 10. Probably the best-known version, however, was by the Righteous Brothers.
North may have been introduced to Ridgefield through Marthe Krueger, a noted dancer in the 30s and 40s, who in 1942 opened the Marthe Krueger School of Dance on Branchville Road. North and she had collaborated on three dance pieces, and Kruger invited him to teach at her school.
North bought a home here in 1950 and continued to use it until the early 1960s. In 1954, he made some local news when he joined his neighbor, Time magazine chief Henry Luce, and Ridgebury conservationist Daniel M. McKeon in successfully suing the town to stop a development along Great Hill Road.
He died in 1991 at the age of 80 in Los Angeles. John Williams offered a eulogy at his funeral.