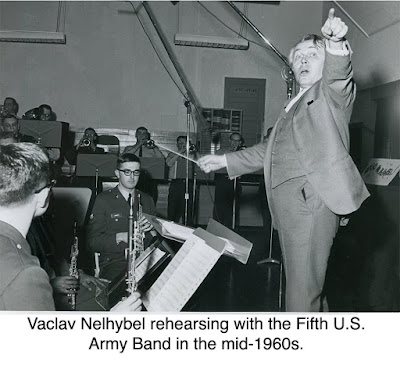 Vaclav Nelhybel:
Prolific Composer
Vaclav Nelhybel was a prolific composer — more than 400 of his 600-plus works have been published — and many of the remaining 200 are in the process of being published. Some  were composed during his five years living at the Ridgefield Lakes.
While his works have been performed by leading orchestras such as the Vienna Symphony and the Orchestra de la Suisse Romande, “Nelhybel’s passion for composing was all encompassing and left him little time for ‘marketing’ his works; for this reason, many of his compositions, though commissioned and performed, remained unpublished,” reports the University of Scranton, where he was composer in residence during his last years.
Scranton is a Jesuit institution and Nelhybel had a fondness for Jesuits — he studied eight years at The Archbishop Gymnasium in Prague, a Jesuit school.
Born in Czechoslovakia in 1919,  Nelhybel studied composition and conducting in Prague and Fribourg. By 1948, he’d escaped from the Communist bloc and was composing for Swiss National Radio, and in the early 50s, served as the first music director of Radio Free Europe.
In 1957 he moved to this country, becoming a citizen in 1962.
He composed symphonies, ballets, a ballet-opera, and hundreds of other works for orchestras and bands — even several works for handbell ensembles. He conducted music and lectured at universities and schools in more than 30 states – including at Ridgefield High School.
More than 1,000 people attended the April 1973 Vaclav Nelhybel Festival in Ridgefield, with the composer leading junior and senior high bands.
“Although Nelhybel wrote the majority of his works for professional performers, he relished composing original, challenging pieces for student musicians and delighted in making music with young players,” Scranton said.
In 1980, the Ridgefield Symphony Orchestra premiered his work, “Six Fables for All Time,” commissioned in honor of the 35th anniversary of the United Nations. In a review of its premiere, composer Noel Regney described the piece in The Ridgefield Press as a “monumental prayer of hope and peace, through all the ups and downs of human life.”
“De Profundis,” a demanding piece for trumpet, was premiered in 1975 by Doc Severinson and has been performed by Seneca Black, who has served as lead trumpeter with Wynton Marsalis’s Lincoln Center Jazz Orchestra.
Nelhybel and his wife had a home on Lake Road from 1968 to 1973 when they moved to Newtown and subsequently to Pennsylvania. He died in 1996 at the age of 76.