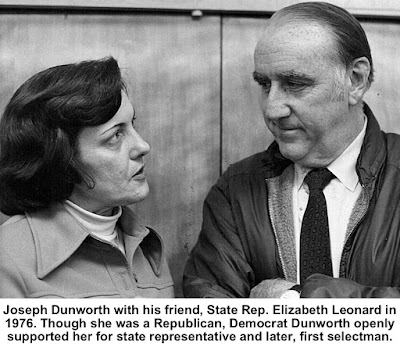 Joseph Dunworth:
Theater and the Elderly
A half century ago, Joe Dunworth was as well known in Ridgefield as any non-native was. Today, while few people in town may recognize his name, many benefit from two of the causes he championed: local theater and tax relief for the elderly.
Dunworth, who served in several capacities as a volunteer town official, was among the first to propose that Ridgefield help its elderly by providing a flat-out tax cut. His idea was eventually adopted and has provided millions of dollars in tax breaks for over-65 Ridgefielders.
He was also among the three people who founded what is today the Ridgefield Theater Barn, the first successful theatrical group in town.
Joseph Michael Dunworth, born in 1923 in New York City, had an early interest in the sea. 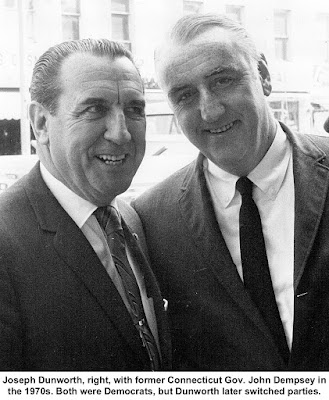 He was valedictorian of his class at the U.S. Merchant Marine Academy at Kings Point, N.Y., and soon joined the U.S. Navy, serving at the end of World War II and during the Korean War. He remained in the Naval Reserve until 1967, retiring  as a commander.

After working for McGraw-Hill and the Burnham Corporation, and earning a master’s degree at Columbia, he formed his own company in 1975. Panatech Engineering sold furnaces and other home heating equipment for such companies as Thermo Pride Industries.
He and his wife, Flo, moved to Ridgefield in 1956, buying a West Lane home that had once housed workers on Frederic E. Lewis’s estate, Upagenstit.
By the early 1960s he began to become active in the community. He eventually served on the Big Three town agencies:  the Board of Education for six years — including time as chairman, the Board of Selectmen for four years, and another eight years on the Board of Finance. He ran unsuccessfully for first selectman in 1969.
For all those offices, Dunworth was a Democrat, but frequently he openly supported Republicans, finally switching parties in 1989. “My enrollment in the Republican Party approximately one year ago was about 40 years overdue,” Dunworth said in 1990 as he was running for state representative (he lost to Democrat Barbara Ireland, the incumbent).
In 1965, Dunworth, along with Evelyn Foley and Patricia DiMuzio,  formed the Ridgefield Workshop for the Performing Arts for not only staging shows but also “fostering and developing creative talent.”  Its first production, one-act performances of “Sorry, Wrong Number,” and the second act from “Auntie Mame,” took place that November. He went on to direct many subsequent 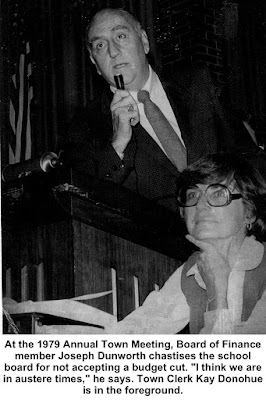 productions including “Bye-Bye Birdie,” “South Pacific,” and “The Pajama Game.” The  workshop grew into today’s Ridgefield Theater Barn, which  has its own venue on Halpin Lane.

He was also active at St. Mary’s Parish, where he was a director of the Catholic Youth Organization.
After the 1990 election, he retired from public life. He moved  to Danbury in 2002 and died there in 2011 at the age of 88.
In 1972, when he was a selectman, Dunworth became perhaps the first local official to actively fight for significant tax relief for the elderly. In July that year he proposed and actually wrote the draft of a proposed state bill that would allow towns to provide tax breaks to homeowners 65 or older.
“Many elderly citizens are finding it difficult and, in some cases impossible, to pay their real property taxes,” he said.  “Many of the elderly are living lives of quiet desperation. Many of them have lived, worked and paid taxes to the community for 40 to 50 years.
“I believe that towns should honor their golden-age citizens, most of whom have ceased benefiting from their tax dollars, and provide them with certain real property tax concessions, thereby endowing them with some dignity and security in their old age.”
Under Dunworth’s proposal, a town could cut a senior citizen’s tax bill in half at age 70 and eliminate property taxes altogether at 75.
That plan did not go over well, probably because of the large amount of money that under-70 taxpayers might have to make up. But a couple years later, Ridgefield adopted Dunworth’s basic concept, creating a set tax cut for those 65 or older.
When the full program began in 1977, senior taxpayers got a $450 annual reduction in their taxes. That $450 was roughly equivalent to $1,850 in today’s dollars. While the dollar amount of the tax break has gradually increased over the years to $1,048 today, thanks to inflation that’s effectively $800 less than what the town granted in 1977.
Joe Dunworth would not be pleased.