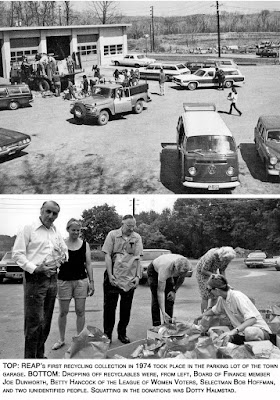 Walter McNamara:
Our Father of Recycling
Ridgefield was a leader in Connecticut in recycling and while many worked to see that recycling succeeded here, no one was more instrumental than Walter McNamara.
A native of St. Louis, Mr. McNamara was born in 1938,  grew up in Albany, N.Y., and graduated from Brown University. He flew helicopters in the U.S. Marine Corps, and was a United Airlines 747 pilot for many years.
Mr. McNamara moved here in 1969. Two years later, a League of Women Voters study of the dump, politely called the “landfill,” and waste management inspired the formation of the Ridgefield Environmental Action Program with the aim of creating a recycling program.
Soon, Mr. McNamara joined and soon REAP knew that a full-time recycling program and center were needed. He helped run REAP's first big fund-raiser, one that gained national attention: “The Dump Ball” took place outdoors on the parking lot of the town garage, right across the road from the town landfill.
“The Dump Ball was a gala event, but every now and then you’d get a whiff of the dump,” Mr. McNamara said 25 years later.
Recycling collections began at the town garage in early 1974, and the recycling center opened later that year. Until 1987, Mr. McNamara almost single-handedly managed the center. The bottle and can redemption law of 1979 cut into revenues, and later, New York's joining the redemption bandwagon hurt, too. But the center increased revenues by expanding what it would take.
By 1988, the job was getting too much for REAP, a volunteer organization; some 1,200 tons were being recycled annually. The town took over and a few years later hired Hudson Baylor, a large recycling corporation, which ran the center for many years. It’s now operated by Winters Brothers.
When recycling became mandatory in the state in 1991, Ridgefield was one of the few towns in compliance on the first day, Mr. McNamara said. When he retired from REAP after 16 years, The Press cited some statistics, such as the fact that just the newspapers that were recycled would form a stack 140 miles high.
“While the weight of what's been recycled over those years can be totaled up,” a Press editorial said, “the hours Mr. McNamara has devoted to recycling in Ridgefield are incalculable. And Ridgefield's loss at his retirement is just as incalculable.”
After leaving REAP, Mr. McNamara became a leader in efforts to control the water quality at Lake Mamanasco, along whose shore he lived. Around 2003, he retired to New Bern, N.C., where his interests including owning and flying his 1943 Seabee seaplane and building furniture.  He died in 2015 at the age of 75.