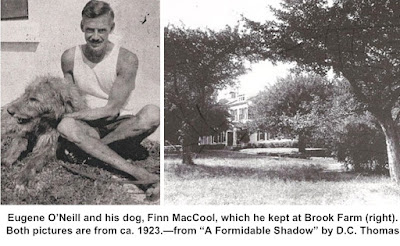 Eugene O’Neill:
Under the Elms
Eugene O'Neill often seemed an unhappy man. But America's only Nobel Prize-winning playwright may have been particularly unhappy in Ridgefield. He disliked the cold winters, perhaps felt the town was not close enough to the sea, and seemed to dislike what he considered a gloomy house. And he may even have imagined ghosts watching him here.
What's more, his marriage was in the process of breaking up when he lived in town.
Nonetheless,  O'Neill used Brook Farm on North Salem Road and its environs as the inspiration for the setting of one of his best plays, “Desire Under the Elms,” and he wrote at least five other plays while here (“All God's Chillun Got Wings,” “Marco Millions,” “The Great God Brown,” “Lazarus Laughed,” and “Strange Interlude”).
And when he was selling the place, he had doubts about abandoning its beauty.
A native of New York City, Eugene Gladstone O’Neill was born in 1888, the son of an actor, and lived his first seven years mostly in hotels and on trains. He was expelled from Princeton, studied briefly at Harvard, and held many jobs — including a stint as a newspaper reporter.
He began to write plays in 1913 and by 1920 he had won his first Pulitzer Prize for “Beyond the Horizon.”
O’Neill bought Brook Farm in 1922 and lived here with his second wife, Agnes, and son Shane.
“His settling at Brook Farm realized an ambition never really achieved by his father — to own and live in a gracious homestead in which one’s children, and perhaps one's children's children, would grow up,” wrote Croswell Bowen in “The Curse of the Misbegotten.”   “Agnes would have preferred a smaller place, but O'Neill always insisted he must have a big house. He felt that at Brook Farm he could at last ‘belong.’”
Silvio Bedini, the Smithsonian historian, grew up nearby and, as a boy, played with Shane O’Neill, whom he found both lonely and spoiled. To Silvio and his brother Ferdinand Bedini, Eugene O'Neill was a stern, brooding, almost superhuman presence in and about the house.
Indeed, the playwright suffered from loneliness, depression and alcoholism (biographer Bowen describes a famous binge in Brook Farm's cellar after O'Neill broke open a barrel of hard cider with poet Hart Crane and critic Malcolm Cowley. At one point, as the playwright poured pitchers of cider, poet Crane, waving a dead cigar, gave a recital as the equally drunk Crowley served as an audience).
O'Neill scholars and biographers say he was unhappy at the house, possibly because of the cold, perhaps because it was not near the sea. At one point, biographer Louis Sheaffer said, O'Neill believed “someone was peering over his shoulder as he wrote, and one night he thought he heard footsteps outside, going round and round the house.”
Nonetheless, in the trees and the stone walls he found inspiration that he employed in “Desire Under the Elms.”
In 1925, while he was living here, his daughter was born in Bermuda; when she was 18, Oona O'Neill married the much-older, comedian-director Charlie Chaplin, prompting an angry O’Neill to disown his daughter — they never saw each other again. Oona remained devoted to Chaplin until his death in 1977. She died in 1991.
By 1926, O'Neill was using Brook Farm only occasionally, but in a letter to his wife written in September 1927 shortly before he sold the place, he wrote: “Going to Ridgefield made me sad. It's so beautiful right now, and I couldn't help feeling more keenly than ever that that's where our family ought to be. I have half a mind to open (the house) myself, except that it would be so lonely all by myself.”
Soon after he divorced his wife and married actress Carlotta Monterey.
O'Neill went on to live in many other places here and abroad, win the Nobel Prize in 1936, and begin a long decline in health from a neurological disorder that ended in his death in 1953.
But though his output had dwindled in his last 20 years, one of his most important works, the autobiographical “Long Day’s Journey into Night,” was completed near his death and published in 1956, earning his fourth Pulitzer Prize. The only other individual to win that many Pulitzers was poet Robert Frost.