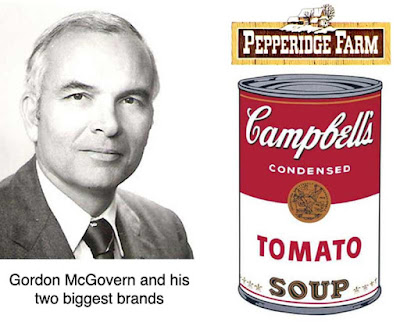 R. Gordon McGovern:
A Kind, Corporate Leader
In the 1980s or 90s, if you were shopping at Ancona’s Market, you might have spotted a tall, well-dressed gentleman, fiddling with the neatness of the bread or soup can displays in the grocery aisles. It was probably Gordon McGovern, who had once swept floors at Pepperidge Farm and wound up its president, and then CEO of parent Campbell Soup.
Richard Gordon Gordon was born in Norristown, Pa., in 1926. An avid traveler all his life, he hitch-hiked across the United States as a high school student.  He graduated cum laude and Phi Beta Kappa from Brown University in 1948 and received his MBA from Harvard in 1950. He served as a Navy radar officer during the Korean War
Starting as a management trainee sweeping floors for Pepperidge Farm, McGovern worked his way up to president of the company in 1968. He became chief executive officer of the parent company, Campbell Soup, in 1980, and retired in December 1989.
At both companies McGovern gained national recognition for the introduction of innovative products, including the 100% natural soup line.
He was always close to the customer. “He would shop for groceries in towns he visited, often discussing products and displays with the store manager,” a family member recalled. And he’d make sure Campbell/Pepperidge Farm items were perfectly presented. Even long after he retired, he could be spotted straightening Pepperidge Farm bread and neatening Campbell cans.
Mr. McGovern was proud of his record of never having closed a production plant at Pepperidge Farm and Campbell Soup (after he left, many were shut down).
Campbell has its headquarters in Camden, N.J., one of New Jersey’s most depressed cities, and during his period as CEO, McGovern’s was considered a “godsend,” said The Philadelphia News in 1989. “Gordon has been a tremendous asset to this city,” said Camden Mayor Randy Primas. "If we wanted to look at any one individual responsible for the development of the waterfront, it would be McGovern. He's one of the city’s unsung heroes."
A modest man, the CEO drove a yellow Volkswagen “beetle” for his corporate commute.
He was a strong believer in education and gave generously to universities, libraries and schools and served on the boards of Wheaton College and the Wooster School in Danbury.  In Ridgefield, the Cain’s Hill Road resident contributed to such projects as building the lighted basketball courts behind the old high school on East Ridge. He and his wife, Julia, were major contributors to the Ridgefield Library, and helped pay for the building of the Dayton Program Room that the library used for more than 20 years.
He died  in 2014 at his retirement home in South Kingstown, R.I. He was 87 years old.