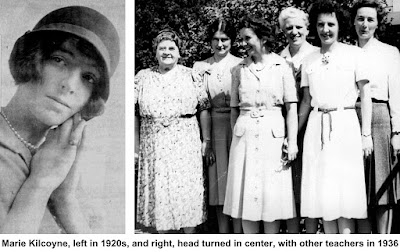 Marie Kilcoyne:
Half Century of Teaching
Ridgefield has had many teachers with long careers in the classroom, but few if any in the 20th Century matched Marie A. Kilcoyne, a native daughter who taught for 50 full years, 43 of them in Ridgefield.
“I teach because I love children,” Kilcoyne told The Press in 1955. “Their vivid imagination and their willingness to please is one of the great pleasures of a primary teacher.”
Marie Ann Kilcoyne was born in Ridgefield in 1907 and started her education here as a pupil at Titicus School, then went to the East Ridge Grammar School and graduated in 1925 from Hamilton High School on Bailey Avenue.
After two years of study at Danbury Normal School (now WestConn), she taught in Easton for seven years, starting in 1927.
She came to the old Branchville Schoolhouse in 1934, teaching first through fourth grade in one room until 1939 when the school was closed. She moved to the Garden School, once the high school she had attended as a teenager, and taught second grade. When Veterans Park opened in 1955, she continued as a second grade teacher there the rest of her career.
Kilcoyne used to “dress for the kids,” said her cousin, Marie Venus. For instance, she’d make a point of wearing jewelry that would fascinate the pupils. “She’d have on silver bracelets and when she went to write on the board, they’d all slip down her arm,” Venus said. “She used to do that just to entertain the kids. They were her life, her pupils.”
When she retired in 1977, Kilcoyne seemed saddened by the fact that TV and other activities were drawing children — which she called “her kiddies” — away from reading and that they seemed to need more direction. “The children are not as able as they once were to do things for themselves,” she said. “Maybe they have too much supervision.”
But she was optimistic, too. “The children are smarter today than in years gone by. They can discuss things more intelligently and their school program is broader.”
Kilcoyne died in June 2000 at the age of 93.