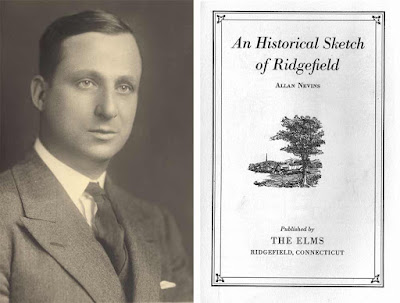 Allan Nevins:
Historian Who Loved Ridgefield
For a small town, Ridgefield has had a wealth of historians, with no fewer than three full-sized histories written about it, plus many shorter works. One of those brief histories was penned by one of the nation’s most prominent historians, a rare winner of two Pulitzer Prizes for historical writing.
Allan Nevins was still a young man when he came to Ridgefield in the 1920s, perhaps to work on a thesis in graduate school or to complete one of his early books on journalism. He lived at The Elms Inn and was so taken by the town that he wrote a 50-page profile, published by The Elms as a booklet entitled “An Historical Sketch of Ridgefield.” While the book is undated, it was published in 1922 and was one of the first written by Nevins, who went on to complete 50 volumes of history and biography, including the acclaimed eight-volume story of the Civil War, called “Ordeal of the Union.”
Born on an Illinois farm in 1890, Nevins earned bachelor’s and master’s degrees in English at the University of Illinois and then moved to New York City where he became a reporter for the New York Evening Post. That job inspired one of his first books; combining his work with his love of history, it was called “The Evening Post: A Century of Journalism,” also  published in 1922.  He may have been working on “The American States During and After the Revolution, 1775-1789,” published in 1929, when he was living in Ridgefield. Or perhaps his time here inspired that book.
His historical research and writings led to an appointment in 1928 to the history faculty at Columbia University where he remained until his retirement in 1958. He then moved to California and continued to write; he was still working on his Civil War series when he died in 1971. His biographies “Grover Cleveland: A Study in Courage” (1933) and “Hamilton Fish: The Inner History of the Grant Administration” (1936), each won a Pulitzer.
Professor Nevins was a friend and supporter of John F. Kennedy, and wrote the foreword to Kennedy’s “Profiles in Courage.” He also wrote the foreword to Silvio Bedini’s 1958 history of the town, “Ridgefield in Review,” in which Nevins sings Ridgefield’s praises like a chamber of commerce director:
“When I made acquaintance with Ridgefield some three decades ago, it delighted me for several reasons. The chief was that it made an ideal center for long country walks, as picturesque as those from a Cotswold or Burgundian village, and a good deal wilder…Ridgefield is set in a remarkably diversified terrain of hills, streams and woods, where no factory smoke stains the sky, and the distant train whistle seldom interrupts the cawing crows.
“My second reason for taking pleasure in the place lay in its historic memories. For it cherishes and fittingly exhibits its relics of colonial and Revolutionary days. Perhaps this filiopietistic trait has developed because Ridgefield has grown and changed but slowly. As a third reason for delight in the place, I liked its neat elegance. It is not merely shining and well improved; it has a distinct and old-fashioned gentility. Finally, it seemed to me a remarkably successful amalgam of new and old, of the provincial and the cosmopolitan.”
Bedini, incidentally, was no amateur historian himself. A Ridgefield native who became a curator at the Smithsonian Institution in Washington, he went on to write more than 20 books of history after completing “Ridgefield in Review,” his first book, in only three months.  Perhaps a bit of his inspiration came from Professor Nevins, who was teaching at Columbia while Bedini was a student there before World War II.