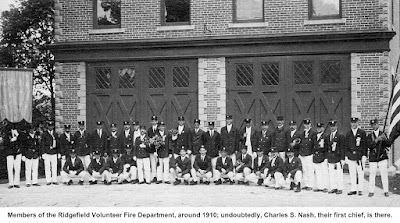 Charles S. Nash:
The First Chief
Charles S. Nash, the town's leading carpenter and builder for many years, has had the unusual distinction of having his birth and very early life recorded in a diary that has been published in The Ridgefield Press and is available online.
On Friday, Oct. 8, 1865, Jared Nash, his father, inauspiciously wrote in pencil in his diary: “Clear, some warmer. Dug potatoes in orchard. Went to P.O. Just at night Chas. S. Nash born.”
Later entries talk of “Charly” and the toys and shoes his father made for him, his sicknesses, and his first birthday and baptism.
As a boy Charles Nash attended the old Flat Rock School on Wilton Road West and the West Lane School, now a museum on Route 35.
He learned the carpenter's trade from William H. Gilbert, and took over his business when Gilbert retired. William F. Hoyt joined him and as Nash and Hoyt, they did much of the building in Ridgefield during the first quarter of the 20th Century, including mansions like Casagmo.
Unlike his diarist dad, who stuck to the farm, Charles Nash was very involved in the town. He was the first chief of the Ridgefield Volunteer Fire Department, helped organize the Boy Scouts here, and was a member of the Board of Burgesses that ran the old village borough. He later served on the Board of Finance, as a trustee of the Methodist Church, a director of the Ridgefield Savings Bank for many years, and vice president of the First National Bank and Trust Company. He ran for state representative on the Democratic ticket in 1906 and 1910.
Nash was also very sharp. The Press once reported that while on the Board of Burgesses, “Mr. Nash figured out how to connect the sewer line for the new Bryon Park development into the borough’s main sewer system, rather than to build a new treatment plant. Mr. Nash was quite proud of that accomplishment because the skilled civil engineers who had been called in to study the problem said it couldn’t be done.”
He died in 1929 at the age of 64. Among the  pallbearers at his largely attended funeral was Francis D. Martin.