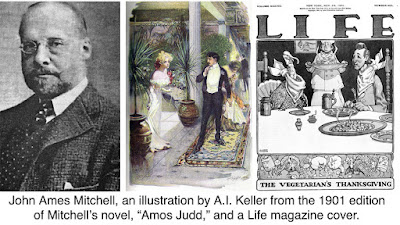 John Ames Mitchell:
The Father of Life
Magazine publisher, architect, artist, novelist, mystic, mystery: John Ames Mitchell was a Renaissance man who kept to himself but influenced many.
Born in 1845, the Harvard-educated architect designed a number of buildings including the beautiful Unity Unitarian Church in Easton, Mass, but soon decided architecture wasn’t for him. He went to Paris and studied at the Ecole des Beaux Arts, and in 1883 founded the original Life magazine, promising “to speak out what is in our mind as fairly, as truthfully, and as decently as we know how.”
Much more like today's New Yorker than the Life of the later 20th Century, Mitchell's magazine discovered and encouraged many fine writers and artists at the turn of the 20th Century, such as Charles Dana Gibson, the illustrator who created the Gibson Girl. It covered the literary scene as well as political and social issues. His staff  included the Harvard graduate and founder of Harvard Lampoon, Edward Sandford Martin.
Life was purchased in 1936 by another Ridgefielder, Henry Luce, who turned it into a picture magazine. Mitchell and Horace Greeley of The New York Herald Tribune founded the Fresh Air 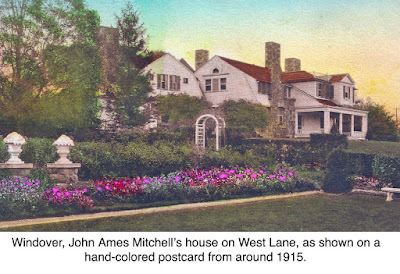 Fund, which for many years operated the Life Fresh Air camp for city kids on the site of today's Branchville School.

Mitchell also penned a half dozen novels, the most famous of which, “Amos Judd” (1895), was made into the 1922 silent film, “The Young Rajah,” starring Rudolph Valentino.
He was “a man who planted many seeds,” said Abraham Puchall, who has a much more than   passing interest in Mitchell. He has lived and worked in Mitchell’s world for years.
The headquarters of Mitchell's Life is now The Herald Square Hotel in New York, a gift to Mitchell from Charles Dana Gibson in appreciation of the publisher’s having seen and developed his potential as an artist. The hotel is operated by Puchall, whose Ridgefield home on West Lane was once Mitchell’s home, called Windover. 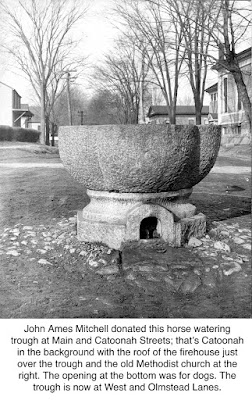 Puchall has spent countless hours researching John Ames Mitchell’s life and philosophy.
Mitchell loved cherubs, he said, using them in his writing and as a symbol for his magazine — Gibson had noted sculptor Philip Martiny create a cherubic Winged Life over the main entrance to the Life building. To him,  Puchall said,  Cupid personified a cheerful but unrelenting guide to truths about human nature and the creative spirit.
Mitchell died in 1918 and is buried in Fairlawn Cemetery.
While his magazine is gone, his books mostly forgotten, and his camp has vanished, Ridgefield has one monument to John Ames Mitchell that thousands see daily. Soon after the turn of the 20th Century, Mitchell donated a watering trough for horses, handsome enough to be placed in the middle of the intersection of Main and Catoonah Streets. It had a large bowl to serve passing horses and included, at its base, a special opening for village dogs in need of a drink. The trough now stands in the island at the intersection of West and Olmstead Lanes, where it is often mistaken for a fountain.