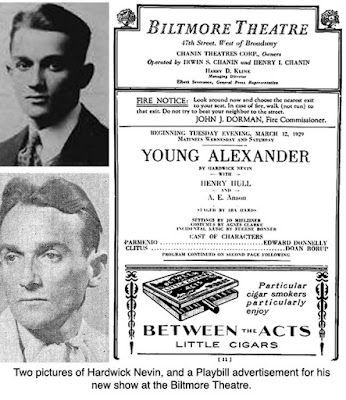 Hardwick Nevin:
Playwright, Actor and Poet
He possessed one of the most colorful names any Ridgefielder ever had, and led a fairly colorful life. But few people today remember Hardwick Marmaduke Nevin.
Hardwick Nevin was a playwright, an actor and a poet whose careers on and behind the stage peaked in the 1920s and 30s.
Born in 1897 in Pennsylvania, Nevin was studying at Princeton when he left to enlist in the American Field Service in World War I, providing medical support for French troops. He received the Croix de Guerre for bravery from the French government.
After the war, he returned to Princeton, not to study but to help start the Princeton Theatre.
He also associated with many of the young literati of the period, including the poets Edna St. Vincent Millay and Edward Arlington Robinson, and the actor Claude Raines.
He began his career as an actor, appearing in smaller parts in Broadway plays.  In 1923, he performed in Cyrano de Bergerac, starring the famous stage actor from Ridgefield, Walter Hampden. In 1925 he appeared with Bela Lugosi in “Arabesque” on Broadway.
Soon he was writing plays of his own. In 1929, “Young Alexander,”  about Alexander the Great, was staged on Broadway and among its cast members was a young Jessie Royce Landis, who later lived on Old Branchville Road and is buried here.
“What Ever Possessed Her” was produced on Broadway in 1934.
He wrote other plays and one, “Blue Haze,” was to be produced by Leslie Howard, but the actor died before production began, and it was never staged.
Nevin, who wrote poetry, was a great fan of Walt Whitman, and was involved in an unsuccessful effort  to save a Long Island schoolhouse where Whitman had taught for a year, He and his friends had more success in getting Whitman’s birthplace four miles away preserved.
Nevin had lived in Ridgefield, then moved to Redding (where his house burned to the ground, destroying much of his writing), and finally in Wilton where he died in 1965 at the age of 68. He is buried in Hillside Cemetery on Route 33 in Wilton.
He married twice, first to actress Patricia Barclay; they were divorced. His second wife, Edna Hoyt Nevin, survived him.