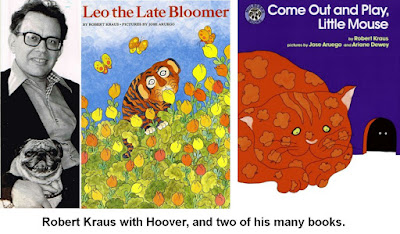 Robert Kraus:
Cartoons and Kids
Robert Kraus was an author, illustrator, New Yorker cartoonist, and publisher who produced dozens of popular books for children.
"I write books to console myself, to encourage myself, to encourage others," he said in a 1979 interview. By then he had written and illustrated more than 60 books, had created dozens of covers for The New Yorker, and had become a publisher whose titles won several Caldecott Medals.
A native of Milwaukee, Wisc., he was born in 1925. While still a boy, he decided he wanted to become a cartoonist and sold his first work — to a barbershop — when he was 10. "The greatest compliment anyone can give you is to buy your stuff," he said.
By the time he was a teenager, he was selling to magazines like Esquire and Saturday Evening Post.
He studied at the Art Students League in New York, where in 1944 he met his wife, Pamela Vivienne Evan Wong, who was also a student. A year later, he joined the staff of The New Yorker, where he worked for 20 years and created more than 40 covers and hundreds of cartoons.
While at The New Yorker, he also wrote and illustrated more than two dozen children's books — many reflecting happenings in his own life. “I wrote ‘Leo the Late Bloomer’ when I was having business problems,” he said. “I tend to write about problems — ‘Miranda's Beautiful Dream' was inspired by Martin Luther King.”
He wrote "Junior" and the "Spoiled Cat" to keep himself calm when his wife, Pamela, was in labor and he couldn't reach the doctor.
He left The New Yorker in 1966 and founded Windmill Books, which published not only his own titles but also the work of such illustrators and authors as Jacob Lawrence, Whitney Darrow Jr., Edward Koren, Norman Rockwell, Mickey Spillane, William Steig, and Charles Addams. Within a year, the house had won a Caldecott Medal and over the years, published more than 200 titles on three continents.
Kraus was known for his sense of humor. In the early 1980s, he wrote "101 Reasons Not to Have Sex Tonight" under the name, I.M. Potent, M.D., whom Simon & Schuster touted as "one of the leading authorities in the world today on not having sex."
In 1983 he began a syndicated Sunday comic feature, called "Zap! The Video Chap," that was aimed at children addicted to the then-new phenomenon of video games.
However, his main interest was always in children's books. "I never slant my books to children," he said in 1979. "My books are not sickening, cloyingly sweet, and they have a point. I'm not a person who likes to write a lot, and children's books are the ideal forum for my ideas."
Among his last titles were "Mouse in Love," published by Orchard Books, and "Little Louis,

The Baby Bloomer," published by Harper Collins, both in 2000. Many of his books are still in print in 2016.

The Krauses moved to Ridgefield in 1965, owning the 1896 Colonial Revival house at the southeast corner of Main Street and Branchville Road. Walking his pug named Hoover and carrying a shillelagh, he was a familiar sight along Main Street sidewalks for many years.
He and his wife moved to New York City in the late 1980s, but "he always considered Ridgefield his home," one of his sons said.
He died 2001 at a nursing home in Kent, Conn., at the age of 76. He is buried in Fairlawn Cemetery in Ridgefield beneath a stone that includes an illustration from his series of books about a character named Spider, with such titles as "How Spider Saved Santa Bug" and "How Spider Stopped the Litterbugs."