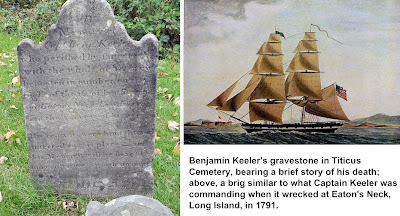 Capt. Benjamin Keeler:
The Ill-Fated Captain
Ridgefield is less than 15 miles from Long Island Sound, and a good number of residents in the 18th and 19th Centuries became sailors. It was a dangerous profession, and some lost their lives at it.
One of the first and worst maritime disasters involving a Ridgefield native occurred on Jan. 16, 1791, when the brig Sally, captained by Benjamin Keeler of Ridgefield, was wrecked in a storm off Eaton’s Neck, Long Island, right across the sound from Norwalk.
He and his entire crew of 10 died.
In an 1892 article about “Notable Shipwrecks on Long Island Coasts,” The Brooklyn Daily Eagle Almanac reported that the Sally, based in Stamford, was returning from a voyage to the West Indies with a cargo of molasses when it hit Eaton’s Neck Reef. “A terrible snow storm prevailed at the time, and the entire crew, supposed to number ten persons, were drowned,” the almanac said. “Six bodies were recovered from the waves.”
An account of the disaster appeared in newspapers along the East Coast, though the news took a while to travel. On March 3, 1791, six weeks after the wreck, The Maryland Gazette in Annapolis carried the story. “The shore presented a mournful and distressing sight” with parts of the vessel, its cargo and the bodies of  the crew floating in the water, the newspaper said.
“The body of Captain Keeler was found, drifted on shore, with his arms clenched fast round the top-mast shrouds, where he probably was when the vessel struck, and fell with the mast.”
“It appears that Captain Keeler, apprehending the destruction which awaited them, packed his clothes up and put them, with his papers respecting the voyage, his watch, medal, and some other things, into his [trunk], locked it, and fastened his keys to the hinge,” The Gazette said.
“Among the papers found, there was one written by the captain, and carefully packed up with the log-book, describing the horrors of the storm, and the distress they were in, being presented with nothing but the gloomy prospect of a watery grave.”
This wreck helped energize efforts in a longstanding fight to establish a lighthouse at Eaton’s 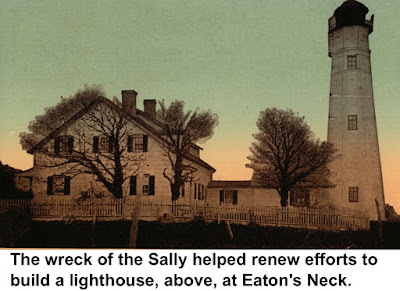 Neck, scene of many shipwrecks. Five years later, a bill finally passed in Congress to erect the lighthouse and by 1799 Eaton’s Neck Light was burning. It still is today.

Capt. Benjamin Keeler was the son of Benjamin and Mary Smith Keeler, born about 1762. He served in the Revolutionary War in 1779 in Capt. David Olmsted’s company. He would have been only 17 years old.
According to The Maryland Gazette, “Captain Keeler was the only son of his mother, and she a widow, a dutiful and affectionate child, beloved by all his acquaintance; having experienced misfortune himself, he was ever ready to succour the wretched. As a seaman he was expert, having followed the business twelve years. He died, aged twenty-nine, lamented by his relations, friends, and acquaintances.”
He is buried in the old Titicus Cemetery. His stone says, as best as we can translate: "In memory of Capt. Benjn. Keeler, who perished by [???] with the whole of his crew, being ten in number, on the night of the 16 of Jan. 1791, on Eaton's Neck, Long Island, in the 29th year of his age. His remains were brought and interred in this place, and his memory will be dear as long as virtue and worth are respected…."