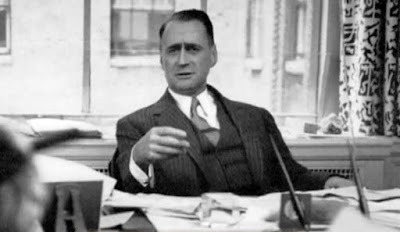 Karl F. Landegger:
The European Yankee
The New York Times once described Karl F. Landegger as “the very model of the urbane and impeccable European businessman…and a tough Yankee trader.” Fortune said: “Hard-driving, sophisticated, and a cool risk-taker, he will obligingly arrange payment and long-term credits, in any one of six different currencies, and spend $300,000 bidding for a paper-mill contract in far away Egypt that he may never get.”
A mill magnate, Mr. Landegger may also have been the wealthiest man ever to live in Ridgefield. In 1964, Fortune magazine estimated his worth at $34 million, but a year before, Parade magazine put his fortune at $250 million, “making him one of the wealthiest men in America.”
His wealth was earned through years of hard work and wise investments. A native of Vienna, he was born 1905 and when he was only 25, had saved $5,000 — and borrowed $200,000 — to buy a paper mill in Austria. Fleeing the Nazis in 1938, he went to London where he joined a pulp merchandising firm that sent him to the U.S. in 1940. Four years later he bought Parsons & Whittemore, a pulp, paper and mill equipment merchandiser and later added other companies. By the year 2000, it was the fourth largest producer of paper pulp in the world.
In the 1950s Mr. Landegger began building paper and pulp mills for developing nations. At one point he had built 14 mills in 10 countries in five years, with 12 more under construction at a total capital investment of a half billion dollars.
“In 1953 he launched the ‘packaged mill’ concept providing all services for developing and operating pulp and paper plants in developing countries,” says the Paper Industry International Hall of Fame. “This resulted in completion of 60 plants in 28 countries, all based on using local raw materials including a variety of non-wood fibers such as straw, bagasse, reeds, grasses, bamboo, esparto, abaca, etc. as well as various wood species. He encouraged governments and private investors to see the rewards of having their own paper industries in these countries, many of which were unable to import adequate paper to satisfy their needs.”
Under his leadership many new kinds of machinery for making — and recycling — paper were put into use.
In the early 50s, Mr. Landegger and his family bought Flat Rock House, a 160-acre estate here, which his family still owns.
Mr. Landegger died in 1976 while at his winter home in the Bahamas, and is buried at St. Mary’s Cemetery. He was 70. Though he was never involved in local organizations, Mr. Landegger and his family have quietly made many contributions to the community. In addition, the Karl F. Landegger Program in International Business Diplomacy at Georgetown University’s School of Foreign Service was endowed to train future leaders in international business, public policy, and business-government relations.